You know the “Polar Vortex” weather phenomena that slammed North America last week was a bitter experience when a Chicago zoo won’t let their polar bear play in the subzero temperatures! 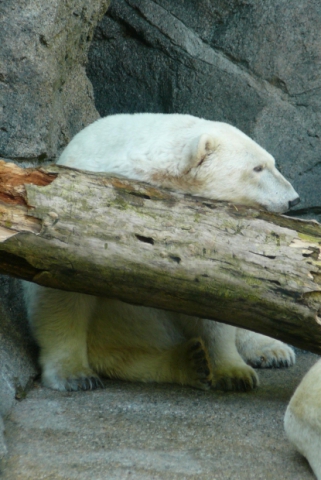 Anana, the Lincoln Park Zoo’s only polar bear, was kept inside on January 6th, when the city of Chicago hit new record lows that got as cold as nine degrees below zero. Brrr! Although a wild polar bear would’ve easily roughed it out in the frigid temperatures, Anana doesn’t have the dense layers of fatty blubber that her relatives have built up by eating large amounts of seal and whale meat. The zoo’s beloved polar bear stayed inside her indoor enclosure that was kept at a temperate 40 to 50 degrees, but she was allowed to venture into the fresh snow of her outdoor area the next day.

In other polar bear news, meet this little guy from the Toronto Zoo! While he hasn’t received an official name from the Canadian zoo just yet, we’ve been treated to a special moment in the cub’s life where he takes his very first steps. Awwww!!!! He was born in November, 2013 and he sucks down no fewer than six bottles of milk each day. His caretakers have teased that we’ll see more videos of the cute polar bear cub soon, and that they’re considering introducing him to snow “in a week or two.” In the meantime, stay tuned for more cuteness!

Crow and Dog Playing Ball! The Animal Video of the Day!!!