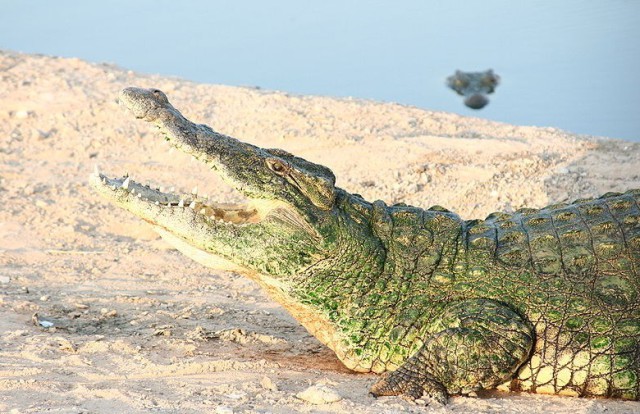 Okay, just read the title of this article one more time.  Holy crap!
The only thing that would make this scenario scarier to me is if sharks
could... I dunno... fly or something!  Then they could hunt us on land,
swooping down like some crazy flying eating machine while the crocs took
out our ankles and legs... Gah!!!!!!

Apparently 15,000 crocodiles escaped from the Rakwena Crocodile Farm in Johannesburg, South Africa. after a series of floods destroyed the containment areas.

Um... 15,000.  That's just plain scary.  Now, part of this is our fault--they were released on purpose into the Limpopo River because the owners of the farm were afraid that the rising flood waters would crush the animals.  Now it becomes a matter of re-capturing the critters.

If I lived in that area, I'd be watching where I walk... very carefully.

PetsLady's Pick: Wonderful Western Tanager Of The Day
Animals So Sweet, You Could Eat 'em! - Animal Art of Olivia, and Hip Hop Candy