The Photographer And The Polar Bear

Wildlife photographer Gordon Buchanan has had a close encounter of the
polar bear kind. Enclosed alone in a transparent safety cage he caught
the terrifying encounter on video for the BBC's documentary series "The 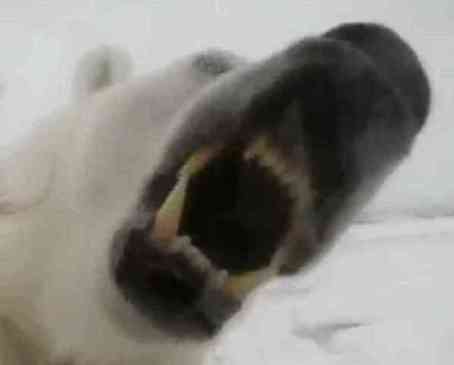 Polar Bear Trying To Bite Photographer (You Tube Image)Polar Bear Family and Me." Buchanan admitted that the experience was the
most terrifying thing he has ever been through.

Buchanan says that he gained new respect for one of the few animals on Earth that actually regards humans as a source of food. He now knows from personal experience how powerful and intimidating a fully grown polar bear actually is -- and what it looks like when that same animal is attempting to take a bite out of you. 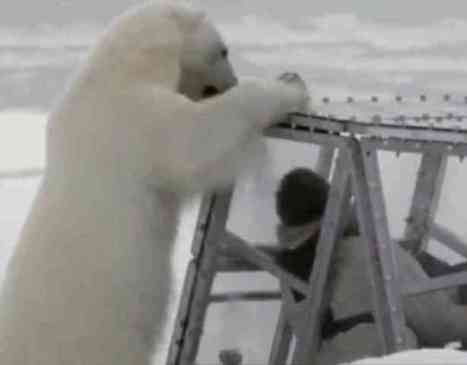 Polar Bear Systematically Trying To Break Into Cage (You Tube Image)The entire encounter lasted a brutal 40 minutes -- beginning with the bear ignoring the seal breathing hole that was the bait and heading straight for the cage with Buchanan inside. The entire time Buchanan kept up a running narrative of what was happening to him, including instances where the bear was clearly catching his scent. The bear systematically tried every angle of the cage, seeking a way in to what it can tell was a tasty morsel. Fortunately for Buchanan the protective Perspex cage was up to the task and he came away just being heartily rattled.

One thing Buchanan seems to have discovered during his ordeal -- polar bears apparently like canned food. Or at least they would if they could get the can open.

Educational
News Stories
Science
Wildlife
The Horror Of Abuse--And The Power Of Love. The Animal Video Of The Day!!!
Spiders, Spiders, and More Spiders!!! The Animal Video of the Day!!!
Pro Pet Tip: Adopting A Millipede
One In A Brazilian: Jean Grey, Our Neighborhood Brazilian Shorthair Cat
Comments