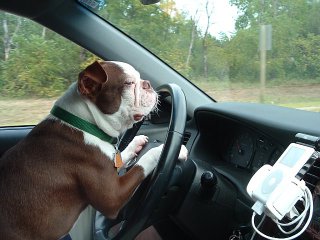 Never again will dogs have to wait, panting at the door, for mom to put her lipstick on and find her darned purse.  Dogs in Las Vegas and Carson City are overjoyed at the prospect of taking the new Google autonomous car to the dog park from now on!

Yes, the Google car, a self-driven Toyota Prius at this stage, has just received its license from the state of Nevada, and the 'autonomous car' will soon be on its way to pick up Buddy and his buddies for a wild time at the dog park.  Just think of the freedom this car will bring to pets all over Nevada and soon, Google hopes, all over the world.

No more waiting for Mom to make the vet appointment, take them to the groomers, or just out to their favorite pet store.  Pets can go to the vets when they are sick, not two days later, and get bathed when they feel dirty, not when Mom thinks they're 'due.'  And when dogs want a decent bone or cats want to sniff some catnip, they can go get it themselves down at the pet store.

And for those dogs, but also pet birds, that insist on riding in the driver's seat... Who's to say no?  Wait, why are you staring at me? Never seen a cockatoo on a steering wheel before?  No, I don't fit in the seat belt, but it doesn't matter because the Google car can't have an accident.

Though Nevada's pets acknowledge that the Google autonomous car was not made special for them... they are more than willing to adopt it as their own, just like they do the kids' toys, mom's shoes, and dad's socks.

The Google car is a pet's new chauffeur.  Just call it and it will come - like a well-trained dog.