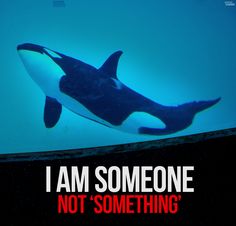 the rights of animals -- could reverse its position on

SeaWorld within the same year. Yet that appears to be the case, much to the dismay of animal lovers the world-over, including one multi-award winning actress and singer.

Reported back in May in my blog titled, “SeaWorld Is The 'Fail Whale' Of The Real World,” I reported on the plight of SeaWorld’s infamous killer whale Tilkum and  the subsequent documentary exposé "Blackfish."

When aired on CNN, Twitter's media blog reporter Simon Rogers announced the news as such: "Not since the story of Moby Dick has a whale been so famous: The plight of Tilikum the SeaWorld orca told in the @CNNfilms documentary Blackfish (@Blackfishmovie) has created a social media tale uniting campaigners and celebrities alike."

Jason Biggs, the actor from the American Pie franchise and no stranger to getting involved in controversial issues, recently partnered with PETA for an anti-SeaWorld commercial. Appearing at first blush as a comedic treatment to promote the merits of SeaWorld: “When I have kids, I can’t wait to take them to SeaWorld," he quickly digressed to reveal his real motive: "Maybe they’ll get lucky, see one of the trainers get their legs ripped off.” Sounds like some harmless family fun to us."

Biggs is just one of many celebrities who’ve been spoken out against SeaWorld. At the Blackfish website, it features

Josh Groban & Matt Damon celebrities the likes of Matt Damon and Josh Groban and a multitude of others, all of whom encourage mankind to stop supporting the theme park. Earlier this year, a number of musicians — including the Beach Boys and Willie Nelson – backed out of commitments to perform at the park’s annual Bands, Brew, and BBQ weekends-long festival, citing the information the movie Blackfish revealed as the reason for their cancellations.

In August, almost 5 months to the day of Jason Bigg’s & PETA’s commercial going live, it’s been reported that PETA has actually bought stock in SeaWorld, much to the dismay of multi-award winner, musician and actress, Cher.

Appearing opportunistic, this is the second time within ten days that PETA has taken advantage of the recent decline in SeaWorld’s stock price. PETA rebuts the criticism by claiming it’s investing in the water park franchise so it can propose resolutions at shareholders’ meetings. The organization also assures the public that they have and will always have the animals best interest at heart, and says it wants to put an end to the killer whale shows. 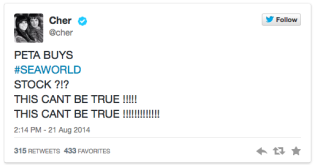 Cher who’s gone as far as labeling SeaWorld, “TortureWorld,” said that she is completely puzzled by PETA’s stock purchases. The pop diva questioned whether this is just a scam on both of their parts, and expressed her confusion, by questioning PETA’s intentions on Twitter.

From a purely business standpoint, could PETA be contemplating seizing control of enough stock to pursue a corporate takeover -- with the ultimate goal of closing the parks altogether? Highly unlikely. . . like Cher's thoughts on this possibility, with a paltry purchase of only a 155 shares, PETA hasn't earned enough clout to even gain them entrance into the 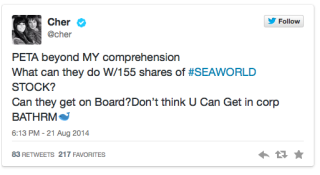