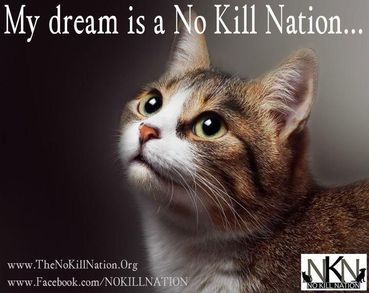 No Kill Nation: NoKillNation.orgA year ago, the Muncie Indiana Animal Shelter had a 40 percent
euthanization rate, 33 percent below the national average of shelter
euthanization, according to the ASPCA.  But that was not a low enough
rate for Phil Peckinpaugh, who took over the Muncie Shelter as director
earlier this year.  In nine months the 40 percent kill rate was reduced
to 10 percent; now the Shelter is 'no-kill.'

'No kill" doesn't
mean that stray animals are never euthanized, but that it is not the
solution applied to solve overcrowding.  Only pets that are seriously ill or
aggressive are candidates for euthanization, but most no-kill shelters,
like Muncie, will attempt rehabilitation before considering putting
an animal 'to sleep.'

Even though its new policies, like taking pets directly from families who cannot afford to take care of them, have increased its population by 500 dogs and cats over the first nine months of 2012, these policies give the city of Muncie a sense of pride. "We haven't had to kill a single animal because we haven't had space for them," Peckinpaugh told the Muncie Star Press, adding, "I'm happy with that number." 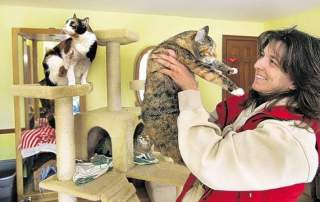 Director of no kill shelter, Pets Alive, visits cat play room in Orange County, NY: image by Times Herald-Record/DOMINICK FIORILLE via recordonline.comOf
course, the costs to support the Shelter are higher and every single square
inch of the facility is packed, but the animals are fed, exercised, and
attended to while they await adoption or settle down to spend their
remaining years in the shelter.  And the Mayor and the community seem
to believe that going no-kill is worth the extra cost.

Most
shelters in the U.S. are not no kill.  Because most states have laws
that prevent euthanization by shelters before a certain number of days,
generally five days, most animals are euthanized soon after that period
has expired. The selection of animals to be euthanized is rather
arbitrary, though those selected for euthanization are generally older,
large, or otherwise considered 'unadoptable.'

Then there is another clock
ticking for those pets offered for adoption, so that if they are not
adopted within a given time, they too are euthanized.  Some shelters,
like the one at the PETA headquarters in Norfolk, Virginia adopts out very few of its pets, euthanizing about 95 percent of the dogs and cats that it received for shelter since 1998.

The
Muncie shelter has partnered with local pet stores to help in adoption
services, with local veterinarians for consultation on medical issues and for neutering services,
with the county's animal control to combine duplicative services...  It
has added staff, expanded open hours to the public, and is using social
media to make connections for lost and found and adoption services.

The
Muncie Animal Shelter has a lot of community support, and a supportive
city council that acknowledged that the recession has put pet owners in
the position of having to abandon their pets, but that is certainly no
fault of the pets. It has allowed the expansion of the Shelter's budget
because, as Muncie Mayor Dennis Taylor says, "You're not always able to
save money, but this is much better for animals and for the city and
county."

If you wish to support no-kill animal shelters, you can find some listed at No Kill Network, the No Kill page at Global Pet Insurance, or check the shelter's website to look specifically for a no-kill policy.