Pearl Of Great Price May Have Been Found In Fossil

When fishermen working off the south coast of England, in a strait known as the Solent,
between Hampshire and the Isle of Wight, brought in their nets they
found that one of their oysters wasn't quite what they were fishing for.
It was a large oyster fossil measuring 7 inches across that was now
solid stone. The age of the fossil is estimated to be about 145 million
years. 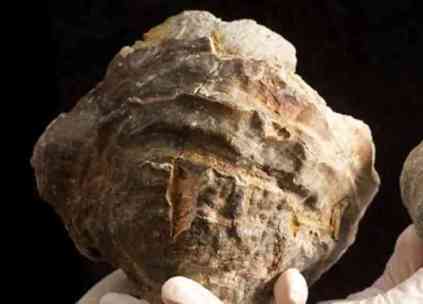 The oyster was on display at a local fishmonger when the Blue Reef Aquarium in Portsmouth, England, heard about it. They called the fishmonger who let them have it for the aquarium.

Naturally that meant that experts needed to look it over and find out what they could about the fossilized bi-valve. Like trees, you can tell an oyster's age by the number of growth rings. They counted more than 200 on this one -- making it an extremely old oyster, and that is without counting the years since it died.

Using a medical MRI scanner to analyze the oyster, experts discovered a smooth object about the size of a golf ball. They believe that it is most likely the largest pearl in the world. However, no one wants to destroy the fossil just to look and see. In this video you will see the fossil compared to the size of an ordinary oyster:

Contrary to common belief, it is not a grain of sand getting into an oyster that causes the pearl to start forming. It is actually started when a parasite invades the oyster. In response the oyster begins to cover the invading irritant with nacre. Over time enough layers of nacre build up to enough to create a pearl. The shape of the pearl is determined by the shape of the original irritant.

A pearl the size of a golf ball would be worth many thousands of dollars. The largest pearls that have been found to date are only about half the size. The oyster remains safely in seclusion at the aquarium, being brought out only for lectures.