To save African elephants, the illegal poaching for their ivory tusks and encroachment into their habitats must be stopped. But how can this be accomplished when demand for ivory by China and the Far East continues to find this trade so lucrative? One way is to attend this year's Paul Winter Summer Solstice Celebration at St John the Divine in NYC, June 22, 2013.

Always known to change things up, Paul Winter's Consort is adding the "Song of the Elephant" to this year's concert repertoire. It was inspired by and interweaves the powerful vocalizations of the African forest elephants.

Joyce Poole & Marcus RojasIt will feature the amazing artistry of tuba master Marcus Rojas accompanied by actual elephant recordings from famed biologist Joyce Poole, who has been recording in the Amboseli National Park in Kenya for 30 years.

This piece will be dedicated to the individuals and organizations working to end the horrendous slaughter of the African elephants that has become epidemic, due to increasingly high prices for ivory, and the growing mania for ivory religious icons and trinkets throughout the world.

A staggering 62 percent vanished from central Africa between 2002 and 2011, according to a study conducted by 60 scientists. It was the largest research project ever followed in the central African forests, where elephants are being poached out of existence. 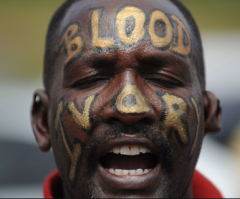 An elephant’s tusks have become bling for consumers who have no idea or simply don’t care that it was obtained by inflicting terror, "horrendous pain and death on thinking, feeling, self-aware beings."

Poaching is big business, involving organized-crime cartels every bit as ruthless as those trafficking narcotics, arms and people. Existing international laws against money laundering should be used to catch and prosecute these criminals.

If you are a fan or potentially a would-be convert to the music of Paul Winter, I strongly suggest you consider attending this very important concert. There you will reap a two-fold benefit of not only listening to the artistry of the Paul Winter Consort but it will also provide you with an opportunity to help stop elephant poaching.

"I have for years wanted to create an album of music celebrating elephants, since having heard in the 1980s the alluring low-frequency rumbles of elephants recorded by my friend Katy Payne (whom I knew from her previous work with the humpback whale)," said Winter.

"As a musician, there is something I know I can do, and that is bring to the world, through music, the voices of these extraordinary and beleaguered beings."

"I hope to complete the album by late summer. I'm approaching it as a corollary to our long-growing "Flyways" album, about the great bird migration from Africa through the Middle East to Eurasia," adds Winter.

Migrating through the Great Rift Valley, one of the most important bird migration corridors in the world. Winters' proposed project will celebrate the great bird migration between Africa, the Middle East and Eurasia.

Here you can listen to Paul Winter speak about flying over Israel with the migrating storks, as they soared on the thermal currents coming up from the valley below. From that experience came the idea to create a musical chronicle of all the birds that participate in one of nature's most unique spectacles. Weaving the voices of the birds and then blending their sounds with cultural music from all the countries they soar over -- is for anyone that knows -- what Paul Winter does best.

For those that want to contribute to help save the elephant cause in addition to other wildlife, Winter suggests you look at the work being done at the Wildlife Conservation Society by Samantha Strindberg and Fiona Maisels. At their site, you will be able to sign a petition that is being sent to Congress to support this cause -- in addition to contributing to the cause here.

How Does a Hedgehog React to a Fart? The Animal Video of the Day!!!

Monkey Dental Care! The Animal Video Of The Day!!!

Try To Get The Beer! The Cinco De Mayo Animal Video Of The Day!!!

Orca Hunting A Fin Whale -- The Animal Video Of The Day!!!
Comments