Scientists in Australia have discovered that female parrot finches are
capable of determining the gender of their offspring to adjust to
environmental conditions at the time. It is a surprising survival
strategy that also 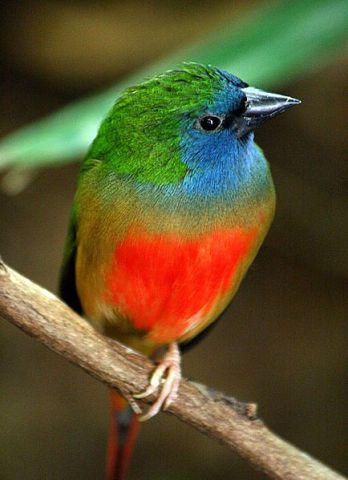 Parrot Finch (Photo by Chaval BR/Creative Commons via Wikimedia)makes a lot of sense. When times are tough and the
pickings are lean, the mama birds produce more sons. These male parrot
finches are better equipped to handle survival with a poor diet.

This finding is the first evolutionary evidence found that demonstrates that mothers are able to adjust the sex ratio of their babies to prevailing environmental conditions to optimize survival of the species. Specifically the finding showed that the determination of gender is in direct correlation to the environment in which the chick will be reared.

Previous studies had already found that the mother's own physical condition was key to the determination of the gender of the offspring.

In this study, researchers took two groups of one-year-old birds, making sure that they were all in equally good health, and fed one group a poor diet and the other an excellent one. The group that received the low-nutrient diet produced significantly more male offspring. The sons of parrot finches grow faster and stronger on the diet than the daughters do, making them less of a burden to the mother during difficult times.

The findings of this study are expected to extend to other species, including humans.