Traveling with pets can be difficult at times, especially if you're flying. There's a fair amount of research that can go into finding an airline that still transports animals, and then there's figuring out which of them will allow pets to fly in the cabin as opposed to being stowed  down below. After a few years of disastrous PR in connection to lost pets and animals that didn't survive flights, airlines seem to be making a concerted effort to change their image by going above and beyond in order to accommodate passengers and their pets. Just recently in the news there was the story about the Air Canada pilot that diverted a jet to Germany in order to spare an adorable French Bulldog from freezing to death on an overseas flight when the temperature control went out in the cargo bay.

Now comes the news that a "full-figured" dog was seen boarding a flight out of Los Angeles (LAX) on what can only be described as a trolley or handtruck. Most airlines require pets to be stowed beneath the seats, if they're going to fly topside in the cabin with their owners. This means they have to be pretty darn small, because — according to airline regulations — an animal must be able to stand and turn around comfortably in their carriers in order to fly. If not, another carrier must be used and the pet will in all likelihood need to be stowed in cargo. That apparently wasn't the case recently on an American Airlines flight where passenger Madeleine Doux snapped a pic of "Hank," fellow passenger Kari Whitman's support animal. Whitman, founder of Ace of Hearts Dog Rescue in Beverly Hills, CA, apparently booked two first class tickets so she and Hank could relax and fly comfortably to their destination. 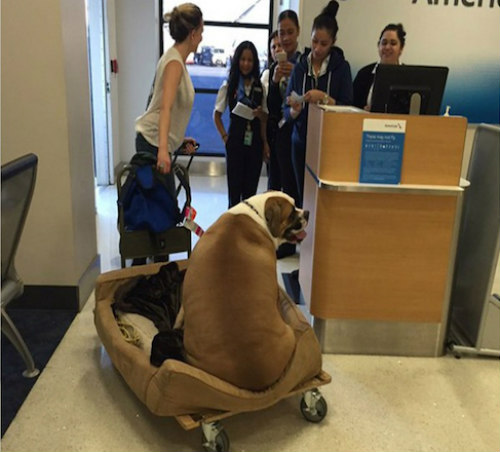 "Hank" getting ready to board first class with his owner on American Airlines: Image via Madeleine Doux on Twitter

Reportedly, Hank is suffering from an undisclosed illness that prevents him from getting around anymore without the aid of a wheeled cart. While American Airlines has a policy of accepting cats and dogs in the cabin of an aircraft, it's still unusual for the animals to be the size of Hank, as he obviously can't fit under a seat. Truthfully, Hank would have a tough time fitting in a seat, were he to decide to enjoy one. But, according to Doux, who tweeted about the event on Twitter, that wasn't the case. It seems Hank opted for lying at his mistress's feet throughout the entire flight. Doux also noted that Hank was a model passenger and never made a peep during the trip. In fact, he was so quiet and well behaved you'd of never known he was on board — except for his hulking body being clearly visible.

What we're wondering is if Hank couldn't maybe be the new poster boy for behavior befitting airline passengers, what with the number of flight diversions due to unruly drunks and psychopaths taking to the not-so-friendly skies these days. American Airlines normally charges a $125 fee each way per pet carrier, and the combined weight of both the pet and the carrier are not to exceed 20 pounds, so it's unclear how Ms. Whitman managed to get them to accommodate her and Hank. Refreshingly, nobody took issue with the arrangement, though, which is kind of unusual in the age of me, me, me. American has also begun offering pet cabins available on select flights between New York's JFK and LAX, and JFK to San Francisco (SFO). There are two cabins per plane in the first section only on these flights, so if you're interested you'll probably need to book early.

The key to successful airline travel with pets is to work out all of the details well in advance of your trip and then to verify everything again a day or two before departure. This way there will hopefully be no surprises. If you've made special arrangements, make sure and get the agent's name and ID number (if they have one) that you dealt with and document the day, date and time the arrangements were made and agreed upon. It's also a good idea to double check with hotels and any other accommodations you may have made concerning your pet, just to make sure everyone is on the same page and you're still good to go. The same thing goes in this situation concerning documentation. It's bad enough to be left hanging when it's just you, but with a pet thrown into the mix you could be facing a travel nightmare that could have otherwise been avoided. You can't control everything, but short of delays this advice should help you and your pet have many pleasant and safe trips in the future.