Otter Relocation Program Scrapped Years After It Was Recognized As "Dumb"

Earlier this month U.S. Fish and Wildlife Service Officials finally
announced that their attempts to relocate sea otters from the coast of
Southern California to San Nicolas Island off of the coast of Santa
Barbara. This was 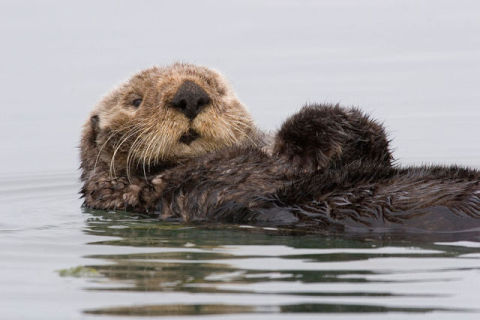 Sea Otter (Photo by Mike Baird/Creative Commons via Wikimedia) intended to then create an "otter-free" zone along the
mainland coastline. It was part of a misguided plan to help allow the
sea otter population to recover.

What should have been an obvious flaw in the plan right from the beginning was getting the otters to stay relocated on the other side of an imaginary line. Between 1987 and 1991 about 140 otters were relocated to the island. The majority of those otters returned immediately to the waters they had originally occupied.

This little sea otter was hunted for its luxurious fur starting in the late 18th Century until it was thought to have become extinct. In the 1930s a colony of 50 was found near Big Sur. There are now about 2,800 and are still listed as threatened by the Endangered Species Act.

The plan was first proposed in 1982 and was to keep otters away from the coastline and all of the Channel Islands except for San Nicolas. Naturally, the otters ignored this and went their own way. Only a small number of the otters were ever captured and relocated to the planned reserve. It was known by 2005 that the whole plan was a dismal failure and not the smartest idea in the first place.