Peaches, The Boston Marathon Therapy Dog: The Other Side Of Pit Bulls

Pit bulls have gotten a really bad reputation over the past couple of
decades and it has led to numerous communities banning the breed. While
some of the dogs have shown aggressive and even violent tendencies, 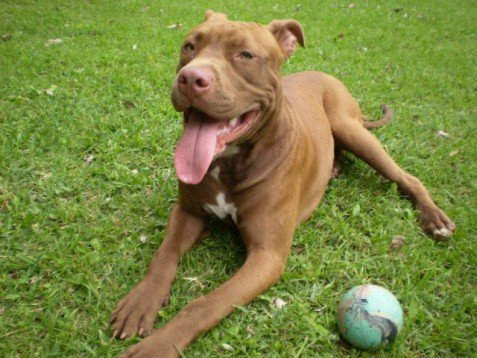 American Pit Bull Terrier (Public Domain Image))they
can also have a sweet, caring side that gets far less press. This has
led to many debates over whether it is really the dogs or the owners
that are at fault. Last year Peaches was called in to help people deal
with the trauma from the Boston Marathon bombing.

Peaches the Wonder Pit started out as a rescue dog scheduled to be euthanized because she was part of a cruelty case in Georgia. Her human mom, Jennifer Bashford, was working for the Humane Society of Charlotte in North Carolina when they saw a picture on Facebook of a dog that needed a good home. It was Peaches.

There was something about this dog that Bashford was drawn to. The dog's previous owners had been convicted of animal abuse and she had been kept locked up for over a year. Once the trial had ended, the county wanted to have her euthanized. It just seemed so unfair. So a group of volunteers from Georgia and Florida got together and found transportation and vet care to get Peaches to the humane society.

For Bashford it was love at first sight and since it is hard to find foster homes for adult dogs she took the 3-year-old animal home with her. It took awhile to get her husband used to the idea. He had become convinced that all pit bulls were vicious, but he eventually fell in love with Peaches too -- yes, it took all of two hours of Peaches climbing in his lap and covering him with friendly dog kisses to convince him. Peaches is now a certified therapy dog.

After the bombing at the Boston Marathon, Peaches was one of several dogs called in to help people deal with the emotional toll of what they had witnessed. On a visit to the memorial at the finish line they approached a police woman who pet Peaches and then broke down in tears. She sat down and pet Peaches for a long time, letting the dog love do its work.

Peaches and Bashford also visited with other officers and school children that were affected by the bombing. Bashford said of their journey, "When you live with a dog you forget what an impact they can have on someone who is stressed out, and they're working so hard and just taking a minute to relax and just pet a dog."

In 2012, Peaches was also voted in to be the American Pit Bull Foundation's mascot. She has become a true ambassador for a dog breed that has become so vilified.

Roadkill: Stuffed Animals Are Getting The Stuffing Knocked Out Of Them