Lilly Saves Owner From Train: The Other Side Of Pit Bulls

Pit bulls have gotten a really bad reputation over the past couple of
decades and it has led to numerous communities banning the breed. While
some of the dogs have shown aggressive and even violent tendencies 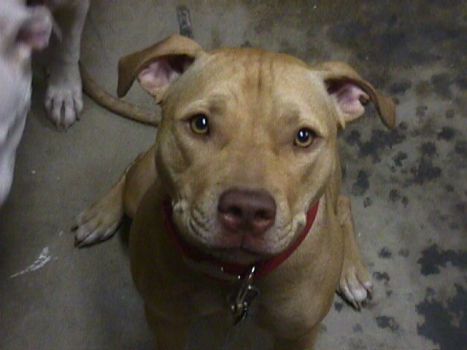 American Pit Bull Terrier (Photo by Dnheinsdorf/Creative Commons via Wikimedia), they
can also have a sweet, caring side that gets far less press. This has
led to many debates over whether it is really the dogs or the owners
that are at fault. Lilly is one pit bull that has challenged the bad
press after saving her owner from an oncoming train.

Back in May of 2012, Christine Spain was walking home from a visit to a friend's house in Shirley, Massachusetts, in the company of her pit bull, Lilly.  Spain had been drinking and unexpectedly collapsed on some train tracks part way through the journey with a freight train coming. Lilly rushed to her human's aid and worked to drag Spain from the tracks.

The engineer on board the train saw the dog valiantly moving the lifeless form and tried to stop, but there just wasn't enough time. Lilly had gotten Spain out of the way, but not herself. The train sliced through one of her paws, fractured her pelvis, and caused numerous internal injuries. Once the train had stopped the engineer rushed to them, terrified that he may have hit them both. Despite all of this trauma, the man found the dog standing guard over her owner until help arrived.

The dog was taken to an emergency animal hospital in Acton. She was then taken by Spain's son, David Lanteigne, an officer with the Boston Police Department, to Angell Animal Medical Center in Boston. He had originally adopted the eight-year-old dog three years previously to provide his mother with love and companionship to help her stop drinking. She had been able to reduce her drinking with Lilly's help. In a sense, Lilly has now saved Spain's life a second time.

Spain survived the incident without injury. Thanks to excellent veterinary care, Lilly was able to return home to her family, even though she did lose her front right leg.

After the incident, Lanteigne commented that this would help demonstrate what pit bulls are truly about and hoped that it would help other good dogs find homes.