Back in 1808, near the height of King George III's popularity, a
monument to him was unveiled in Osmington, England. A figure of the king
upon his horse was carved into the limestone of a hillside by soldiers
under the 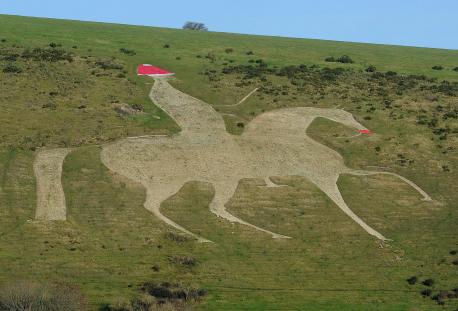 Osmington White Horse with Christmas Atires (Photo by Finnbarr Webster via the Dorst Echo)direction of James Hamilton, a local architect. This year some
pranksters climbed the hill to give the horse a red nose,a la Rudolph,
and the king a Santa hat.

The carving was done in Osmington because it was an area that King George frequently rode through on this way to visit friends in Weymouth. Over the years a few legends have grown around the figure. One says that the king hated the figure because it depicted him riding away from the town instead of towards it. The same tale also claims that one of the men behind the carving was so embarrassed by the whole thing that he took his own life. This is unlikely since King George never saw the carving due to his declining health and mental state. 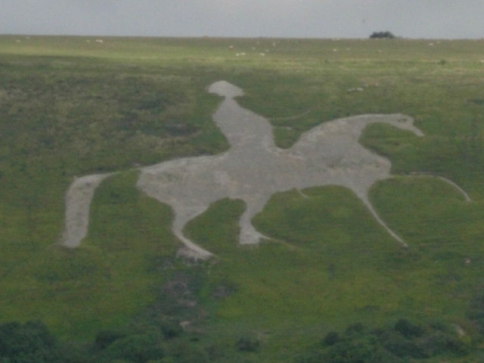 The Osmington White Horse Prior to Restoration (Photo by Val Vannet/Creative Commons via Wikimedia)This isn't the first time that the figure has taken on a new guise. It has also been changed to zebra, a pink donkey, and a unicorn.

The Osmington White Horse Restoration Group has been working on restoring the figure after years of weathering. A botched restoration attempt in 1989 had caused further deterioration after spreading limestone chips over it.

Locals are far from offended by the prank. They are enjoying the view and find that it fills them with Christmas cheer.

It's Hard to Be a Cat at Christmas -- The Bonus Musical Animal Video of the Day!!!
Rudolph The Candy Cane Reindeer Door Mat