A hedgehog in Minehead,
Somerset, in England has grown to three times normal hedgehog size. Last year he
was undersized and starving when a couple found him in their garage,
pathetically wrapped up in an old Father Christmas jacket. He was so
thin that he wasn't able to hibernate. The couple installed him in their 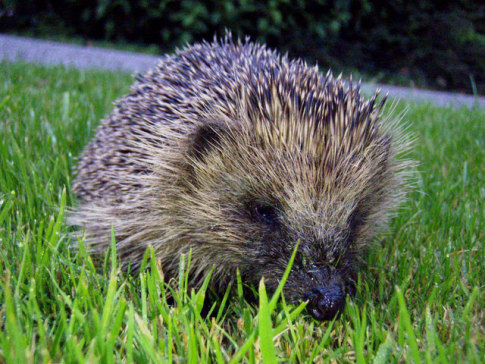 conservatory on a heating pad and started feeding him.

They may have been killing him with kindness -- and a steady diet of cat food. The spiny little mammal, now named Roly Poly, cannot be released back into the wild because he is too fat to curl into a ball. Without his main form of defense, he would be easy pickings for a predator.

Roly is now in the care of the Secret World Wildlife Rescue Centre in Highbridge, Somerset, and is on a strict diet of cat food and biscuits to get him slimmed down. He is too big to live in any of the hedgehog boxes they have, so he is living in an otter box instead. His rehabilitation and weight loss is expected to take quite some time since he needs to lose half of his body weight.

A quick Google search shows that overweight and obese hedgehogs are not uncommon. They even have their own song and You Tube Video:

Apparently, it is very easy to over feed hedgehogs since they are greedy little critters and will scarf down what is set in front of them. So the hog part of their name is accurate, and not just because of the shape of their snouts..