Nighttime Attack Of The Cannibal Lobsters 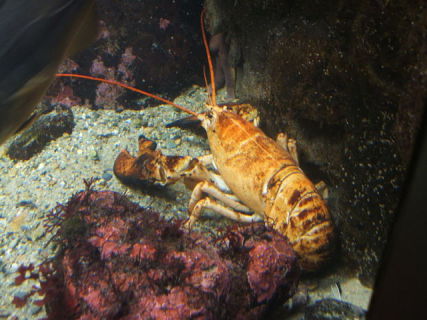 Yellow Lobster (Steven G. Johnson/Creative Commons via Wikimedia) This is also due to over fishing species like cod and
halibut who feed on lobsters. These factors have created a lobster
paradise -- sort of.

Paradise never seems to come without a price. Graduate students from the University of Maine decided to study the lobsters. They tied a young lobster on a string and set it out with a video camera to document what happened to the lobster. The expectation was that the video would show them nothing new. During the day that was exactly what happened -- just visits from the usual predators. During the night was a different story altogether.

The nighttime hours showed the juvenile lobsters being eaten by larger, older lobsters. For several nights the experiment was recreated and each time the same thing occurred. In one case an even larger lobster and chased off the smaller adult lobster to be able to feed on the smallest lobster. This is the first time that lobsters have been seen to engage in cannibalistic behavior in the wild.

It has long been known that they are combative in captivity, which is why they always have their claws banded while in tanks.

While this study showed surprising new information about lobsters, it has also created new questions, as studies do so often. Additional studies will be needed to look at why the lobsters are cannibals and what happens if the young lobsters are not leashed and have the opportunity to get away.

'Headless Chicken Monster' Is Neither Headless, A Chicken Or A Monster
Microchipped Bees Will Show Us Where They Buzz Off To!

View My Menacing Presence! The Lion Under The Bed Animal Video Of The Day!!!
Comments