New Species Of Spider Found In Oregon Cave: It Has Claws!

Trogloraptor.  It's a new species of spider found by citizen scientists in the caves of southwestern Oregon and studied and named  by arachnologists from the California Academy of Sciences (CAS).  For arachnophobics, it's just an uglier, scarier, larger version of the rest of the spider clan - only with claws! 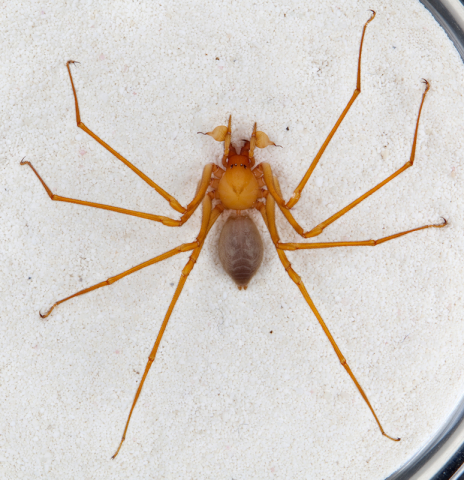 But don't worry, lead researcher from the CAS, Charles Griswold, studied the 'trogs' and said they are pretty docile with humans and seem to be most anxious to get away from them - and away from light too.  Only if you're a small flying insect in a cave need you be afraid.

Why?  Because the Trogloraptor catches prey from a hanging position, its approximate 1.5 inch body splayed in the air with its claws open until it can grab a passerby that's small enough to be trapped.  Scientists assume the bait are small flies, but they have not figured out the trog's desired prey as yet.

Arachnologists around the country have identified the new spider's lineage after comparing its anatomy with fossil records and conducting genetic analysis. It turns out that the spider is not  really 'new,' having several features of primitive spiders. It is likely that the Trogloraptor branched off on its own evolutionary path some 130 million years ago.

But there's reason to believe that this creature, so far identified only in the Oregon caves and in the old growth areas of the redwood forests of California (by San Diego State University researchers), that there may more of the Trogloraptor in similar surroundings, such as caves in Nevada, according to Griswold.

There are some similar-looking spiders like the Spelungula of New Zealand, but they don't challenge the Trogloraptor's claim to its own species.  Something else to dream about!

The full study of this discovery is published in ZooKeys.

See also: 10 Bugs Cuter Than Puppies or Kittens and our other insect articles.