After carefully examining a large, single limestone tooth fossil, a researcher realized that it belonged to an extinct platypus species that must’ve stretched at least three feet long!

Unfortunately, a few fossils that were recovered from Northern Queensland, Australia were left to gather dust in a cupboard for a few years, but after another look, scientists have managed to deduce that one of the fossils was a tooth that apparently belonged to a massive platypus. The unnamed large monotreme, or egg-laying mammal, probably hunted larger vertebrates such as frogs, instead of the squishy invertebrates that surviving platypus consume. Then again, it could’ve been a “baby” giant platypus that might have grown to be 15 feet long and ate wombats and kangaroos from the riverbanks like a duckbilled crocodile- We may never know! 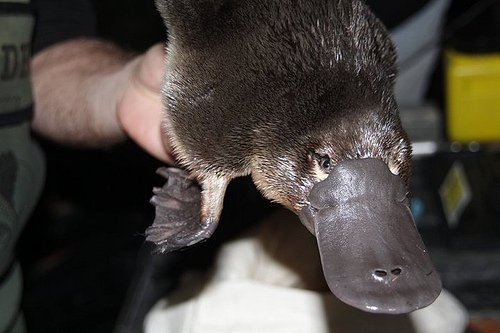 Still, this “behemoth’s” living relatives are oddballs themselves. The males have venomous barbs on their hind legs, and females lay eggs unlike most mammals. Their range includes most of Western Australia, where the cute little platypuses hunt along the bottoms of ponds and riverbeds by poking their sensitive snouts around the muck for insects, larva, worms and other invertebrates. Although a platypus isn’t as graceful on land as it is in the water, the webbing on the creature’s claws retracts so the platypus can use its nails like an athlete’s cleats to move more quickly on dry ground.

The biggest mystery about this unknown giant platypus species is whether or not it would be as sweet as the cutie in this video! Cute overload!