It is a practice that hearkens back to a time of luxury in England, when
the wealthy would saddle their favorite horse, release the fox, and
unleash the hounds. While it was considered good sport by the humans
involved, 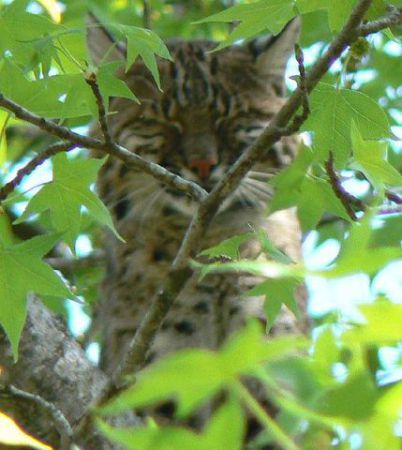 Bobcat in a Tree (Public Domain Photo)there is little doubt that the fox had a different opinion
since in most cases the activity ended with the death of the fox. This
type of hunting has been banned in most areas since
2002. Now similar hunting practices used to hunt animals such as bear
and bobcats has been banned in California as of the first of the year.

Packs of dogs have been trained to chase the animals into trees and then bay for the hunter. The hunter follows the sound of the dogs and is able to easily gun down his terrified prey with ease. The new law prohibiting the use of dogs in hunting bear and bobcats is more for the protection of the wildlife than for the protection of the dogs. Being terrified into cowering in a tree is hardly sporting for the wild animals. Chasing the wild animals can also be dangerous for the dogs if a cornered bear turns on them.

State Senator Ted Lieu, whose bill has banned the practice, said that killing a bear stuck in a tree is the equivalent to shooting a bear that is captive in a zoo.

Regular hunting of the animals is still legal in season. Hunting with dogs is also still allowed for birds and feral pigs. Other states are also considering legislation banning hunting with multiple dogs.