While it has long been jokingly said that you don't adopt a cat, it
adopts you, there are times when cats go out of their way to prove how
true that is. In the case of Mr. Fancy, a tabby cat, he had chosen where
his heart belonged and nothing was going to stand in his way to be with
the family he loved. Even the family had to accept the fact that they
were his -- forever. 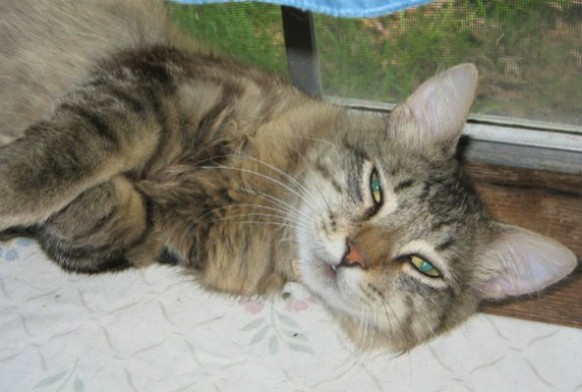 It all happened in Lucedale, Mississippi, when Ann Bosche, an animal rescuer, found a stray cat roaming her property. It was not uncommon for people to drop unwanted dogs and cats in her neighborhood and she figured that he was just another one. When he came out from under the bush she saw that he had a white tip on the end of his tail which caused her to remark, "Aren't you a fancy thing?" Thus he became dubbed Mr. Fancy.

He was wary of them at first, as any good cat would be, but he was soon waiting for his meals on time every day.  He stayed with the Bosches for a month until Ann's husband decided that he had to go. The Bosches already had a dog and two cats and the man felt that they had their hands full. Ann reluctantly took her now beloved Mr. Fancy to the local animal shelter, and then cried the whole five miles home.

Mr. Fancy had other plans. After only 20 minutes at the shelter he made his escape and vanished. He knew he had lived rough before and knew that he could do it again. He was a cat on a mission.

A month later Ann awoke one morning to hear her husband having a conversation with someone in the kitchen. Wondering who on earth could be at their home at 5:30 in the morning she went to investigate. She found her husband deep in conversation with a cat at his feet. With a flip of his white-tipped tail, Ann realized that it was Mr. Fancy. He ran to her, meowing all the way.

It had taken the intrepid little kitty a month to search for them, but at long last he was finally home -- and this time for good. After such determination to get back to them, the Bosches could not deny that they were meant to be his and he is in his forever home. It's all just purr-fect now.

Get Ready For An Overdose Of Cute! The Animal Video Of The Day!!!