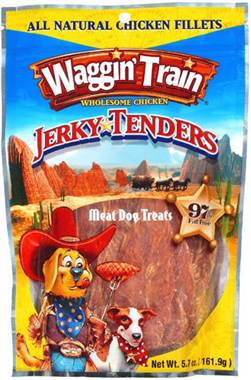 This recall was instigated by the New York State Department of Agriculture and Markets, which found trace amounts of antibiotic residue in samples of chicken jerky marketed under both brand names - Waggin' Train and Canyon Creek Ranch.  When will U.S. importers learn?

No pet owners have reported injury or death from these treats to date.  Nestlé Purina says there is no cause to worry about your pets chewing or ingesting the treats because the amount of antibiotic residue, which is legal in China and several other countries, is minimal - some number of parts per billion. Nevertheless, Nestlé Purina has issued a country-wide recall of both the Waggin' Train and Canyon Creek Ranch brands of chicken jerky treats.

Because the use of antibiotics is illegal in animals raised for human or pet consumption in the U.S., importers of these products to the U.S. need to reconsider their commercial sources, don't you think?  Isn't it about time?

The president of Waggin' Train, Nina Leigh Krueger, is quoted in the company's press release as saying, "Once we understand and determine how to comply with the technicalities of different regulatory frameworks, we will work with all appropriate parties to define the best way to supply the market.”

Where has she been? (Are you scratching your head, too?)

How many pet food products and pet toys made in China need to be recalled before the manufacturers get it?

And that goes for consumers too.  Why don't you stop patronizing companies - not just boycotting certain products - that manufacture pet food or pet toys in China or anywhere else that have ignored U.S. laws that have been hard fought to protect our pets?