July 29th was an auspicious day. It marked the birth date of the first known surviving panda triplets. The 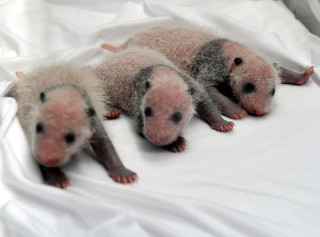 12-year-old Chinese mother, named Juxiao (which translated means “chrysanthemum smile.”) who delivered the three little bears at Guangzhou’s Chimelong Safari Park waits anxiously with the rest of the world who are all rooting for their survival.

Pandas, whose natural habitat is in mountainous south-western China, live amongst what is thought to be only 1,600 remaining in the wild. More than 300 live in captivity right now, mostly in China's breeding programs or safari parks.

Hailed as a miracle, the cubs were quickly placed into incubators as Juxiao was initially too exhausted to nurse them. Joe Bereta from SourceFed posted this humorous video where he details the birth and the artificial breeding program that was put into place to make this miracle happen.

With encouragement from safari park’s general manager Don Guixin, he indicated the births exceeded everybody’s expectations. "It's been 15 days. They have lived longer than any other triplets so far."

“The triplets can be described as a new wonder of the world," a statement from the safari park noted, adding however that mortality rates among newborn pandas were extremely high. 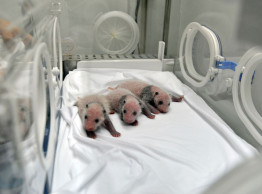 ounces) and noted they were smaller than the size of a human palm at birth. The cubs’ gender cannot be determined until they are older, and they will be named at a later date.

The first recorded case of giant panda triplets was recorded in 1999, when a 15-year-old mother gave birth following artificial insemination in the south-western Chinese city of Chengdu. The youngest of the brood died of bladder infection after only three days.

Adult giant pandas grow to about 1.8 metres long and 90 centimetres tall at the shoulder, with males weighing up to 160 kilograms. Pandas are one of the most endangered species on the planet and a national symbol of China, the only country where they can be found in the wild. The species is endangered due to the destruction of its habitat and the disappearance of bamboo, its main food source. 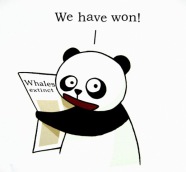 Here’s rooting for these three little bears to survive and live long, happy and non-extinct lives!