Back in August Anthony Ortolani climbed Mount Bierstadt, one of the many "fourteeners,"
or peaks that rise to 14,000 feet or more above sea level in Colorado.
He took his German shepherd, Missy, along with him. On the 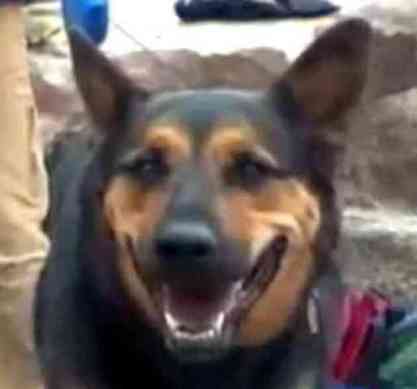 Missy (You Tube Photo) way down he
reached a point where Missy could not make it on her own. He said that
he didn't want to leave her, but decided that he had to stay with her
and die himself or go down the mountain without her. Eight days later
she was found at 13,000 feet by Scott and Amanda Washburn, skinny, bleeding, and clinging to life.

Scott and Amanda were also unable to get her down, but on their descent they put out the plea for help over the internet to the climbing community. The response was a landslide. Eight people ended up climbing the mountain to rescue the dog. The operation took a grueling nine hours with a storm threatening to engulf them at any moment. Since Missy was unable to walk, they packed her into a backpack to carry her down the mountain. 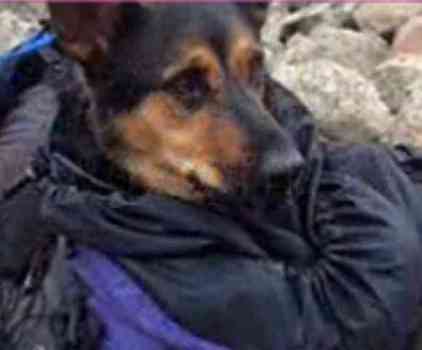 Missy In Backpack (You Tube Photo)Once she was safely down, her rescuers took her to a local veterinarian, who was surprised to find that she had no fractures, no internal injuries, or any permanent damage. She had survived against all odds. Ortolani turned up saying that he wanted his dog back. The public outrage was swift to condemn the man for not doing enough to save his dog, and Missy's rescuers refused to give her up to him.

Ortolani has since been charged with criminal cruelty to animals for abandoning Missy and doing nothing to rescue her. If convicted, Ortolani faces as much as 18 months in jail and $1,000 in fines. One of the rescuers would like to adopt Missy. A judge will make the ultimate decision on who will get custody of Missy.

The story has created so much notoriety for Missy that her rescuers will be guests of Ellen DeGeneres on her talk show on Monday, September 17.  Hear the story directly from the people who lived it. Check your local television listing for when to watch.

PetsLady's Pick: Cute Doctor Who Dog Of The Day

The Unsolved Mystery of the Titanic Dogs

Hey Everybody! It's An Easter Beagle!
Comments