Sunday saw the vehicle bay of the Millville, New Jersey Rescue Squad
became a veterinary operating theater as a spay and neuter clinic
sponsored by the Animal Friends Foundation was open for business. People 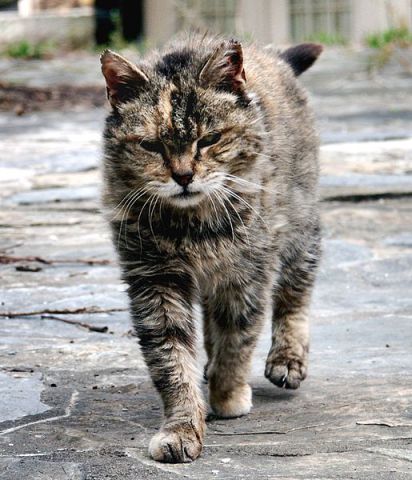 Feral Cat (Photo by Stavrolo/Creative Commons via Wikimedia)brought in 142 feral cats from their respective neighborhoods for the
procedures to help give the animals a better quality of life, reduce
their chances for being euthanized, and to keep them from creating
another feral generation.

Most of the cats arrived alone or in pairs, but one woman had managed to corral ten cats from the colony of feral cats she looks after.

Millville is on the leading edge of communities that are adopting a "trap, neuter, and release" ordinance. The ordinance gives support to those individuals who care for ownerless outdoor cats. Animal Friends Foundation, a volunteer animal welfare organization, received $10,000 in grant money from PetSmart Charities to fund the clinic.

Millville Mayor Tim Shannon, a big supporter of the trap and release program, was instrumental in arranging the use of the rescue facility for the program, and the city lent trucks and workers for transporting the necessary equipment. Veterinarian Matt Schwert did all of the operations.

Along with the benefit of having fewer feral cats producing more feral kittens in the area, thanks to the animals being spayed and neutered, some people have decided to adopt the animals.

Cats
Health
News Stories
How Many Ways Can You Say Cat?