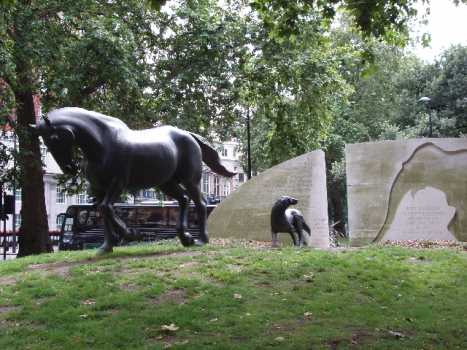 The Animals in War Memorial in London, England.Hannibal had crossed the Alps with his
elephants. Throughout history animals have worked as guards, weapons,
couriers, transport, explosive detection, and even psychological support during military campaigns. A memorial tribute
to these animals has been erected in London, England. It is dedicated
to all those animals who served the British Commonwealth and Allied
Forces during the conflicts of the 20th Century.

Most recently it was the dog that accompanied the elite Navy Seals team that killed Osama Bin Laden that brought the role of animals in the military into the spotlight. An estimated 1400 dogs serve in the U.S. military currently.

During the 19th century the United States Army experimented with using camels as pack animals in the Southwestern part of the country. The practice was abandoned due to the animal's unpleasant nature and the difficulty the horses had with being around camels.

Before
the advanced electronic communications systems, military units
communicated through the use of pigeons and dogs. Pigeons can fly up to
60 miles per hour -- which made for the speediest communication in those
days. Pigeons were also used in more recent times, such as D-Day, when radio silence was essential. More than 300,000 pigeons were
used during the First and Second World Wars. Dogs were also used as messengers when human messenger would make too
large a target near the front lines.

During World War I
eight million horses lost their lives in the line of duty, as well as
many mules and donkeys.  They were used to carry soldiers and ammunition
to the battlefields of Europe. This was done again in World War II just
over 20 years later. A humane society in London created gas masks designed for horses to wear for protection when needed.

Not
all of the creatures who served did so with specific 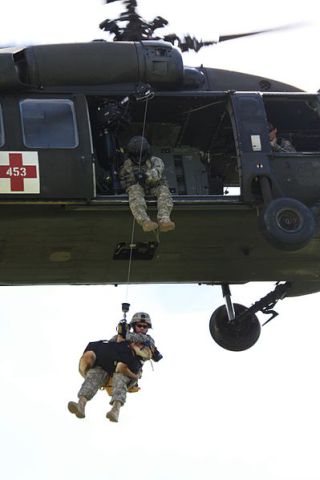 The United States Military Has As Many As 1400 Dogs Currently In Service training. Some
were just needed to do what came naturally. During World War I even glow worms helped Allied troops by providing light for the soldiers to be able to read their maps at night. Definitely a bright idea.

It is not just dogs who serve in the military these days. Dolphins locate underwater mines. Seal lions patrol coastal waters to detect the presence of enemy intruders. So far, this practice has gone swimmingly.

Honey bees are being studied to see if they can help detect bombs.by scent. There is a Hybrid Insect Initiative a;so at work where scientists implant electronic controls into the insects during metamorphosis allowing them to be controlled. This would allow for covert surveillance and detection. While an interesting idea, it seems that one can of Raid could derail the whole operation.

For a short time during World War II, the U.S. military considered using bat bombs. This was to be acheived  by mounting small incendiary device on a bat and setting it free to infiltrate enemy cities. This project was abandoned after one bat started an air force base on fire. Ultimately it was a batty idea.

For a short time during the 1960s a program was in place to try to turn cats into spies, but cats, being a self-serving lot, were not very cooperative and difficult to train and control. What a surprise. Cat owners worldwide could have guessed at this outcome.

The use of animals in military service is a controversial topic and groups such as PETA, People for the Ethical Treatment of Animals, claim that since the animals had no choice in enlisting, do not understand human conflict, and are unlikely to survive their tour of duty, their use in military operations is unethical. They indicate that there are other, more sophisticated technologies available that would suffice without endangering the animals. Military experts disagree, siting the unique abilities possessed by these animals such as low-light vision and directional hearing that can't be duplicated even with the most advanced technology available.

Whichever side you come down on with this issue, take a moment this Memorial Day to remember the animals that have served alongside our soldiers and sailors over the centuries.

3+ Top Rated Soft-Sided Portable Pet Playpens
British Parrot Speaks Spanish After Being MIA For 4 Years
Hummingbirds And Chewed Gum Are Not A Good Combo -- The Stuck Animal Video Of The Day!!!
Should We Be Allowed Bereavement Leaves For Animal Loss?
Comments