Rescued from a horrid life in an India dump, adventurer Joanne Lefson saved, adopted and took Rupee the dog on a trek that made him the first canine to officially climb to Mount Everest’s base camp. Talk about being on top of the world!

Poor Rupee was suffering from severe malnutrition and dehydration when Joanne discovered him in a dumping site in Ladakh, India, but was quickly nursed back to health at home in South Africa with a diet of boiled eggs, rice and love. Shortly after Rupee recovered, Joanne decided to take him along for her planned climb up Mount Everest, the tallest mountain on earth. Although Rupee excitedly led the way for many of the ten day trek, her thoughtful owner hired a Himalayan porter to help carry the young pup when he got tired. 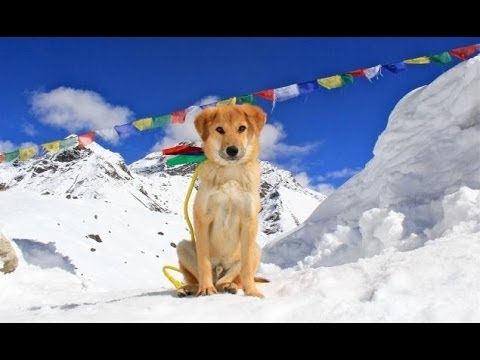 When Rupee made it to the Mt. Everest base camp, he officially became the first dog in recorded history to make the 17,000 feet above sea level trip. Don’t worry about Rupee getting altitude sickness, as his vet assured Joanne that he’d be fine because he was probably born in the Himalayas. According to the duo, other climbing tourists were a bit jealous that they didn’t bring their own dogs along, and that one of Joanne’s favorite highlights was Rupee’s introduction to snow. That lucky dog had a blast playing, bouncing and eating the white stuff whenever he could. From Joanne’s long track record of globetrotting with Oscar, her first canine companion, Rupee is bound to have an exciting life filled with new experiences, snacks and cuddles all over the planet, and I’m sure he’ll have fun every little step along the way!

Clear The Streets! The Lambs Are Coming! The Animal Video Of The Day!!!

Grey Whales Hanging Out With Tourists! The Animal Video Of The Day!!!
Comments