British heraldry has a long tradition of using animals in its imagery.
On the grounds of Queen Elizabeth II's favorite residence, Windsor
Castle, is St. George's Chapel, and on the roof of the chapel are 76
heraldic statues representing the Queen's (or King's) Beasts. The
original statues dated back to the 16th century but were removed in
1682. They were finally restored in 1925. 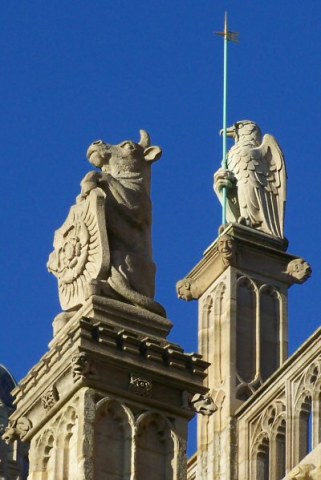 The removal of the statues was done on the advice of Christopher Wren, a renowned British architect at the time (and since). They probably clashed with his ideal of the appropriate style of architecture for royal buildings. When the chapel was restore in 1925 new versions of the statues were reinstated as a part of the external architecture.

The statues represent 14 of the heraldic animals of England, both real and mythical. All of these heraldic animals are associated with the Plantagenet and Tudor royal families. One, of course, is the lion of England, which was first used by Richard the Lionheart in the 12th century. Other real animals also represented are the panther of Jane Seymour (the third wife of Henry VIII), the falcon of York, the black bull of Clarence, the Mortimer white lion of March, the white greyhound of Richmond, the white hart (deer) of Richard II, the Bohun collared silver antelope, the white swan of Hereford, and the golden hind (another kind of deer) of Kent. 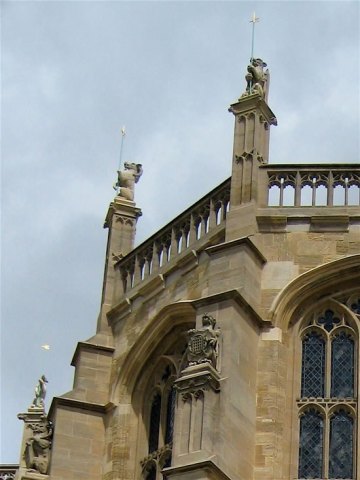 Mythical creatures represented in the statuary are the red dragon of Wales, which dates back as far as the 9th century; the Beaufort yale of Kendal, a goat- or antelope-like creature with enormous horns; the black dragon of Ulster; and the unicorn of Edward III.

All of these animals grace and guard the top of the chapel of a church named for St. George, the patron saint of England, and the saint who is best known in popular culture as having slayed a dragon. 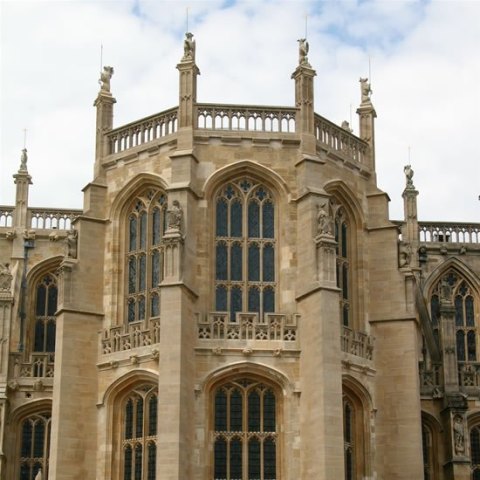 While these animals were originally meant to capture the spirit of the qualities that each herald was meant to represent, today there also seems to be a charming and somewhat whimsical aspect to them as well. Perhaps that is why, in addition to the tremendous historic value, there was a desire to restore them to their rightful places. And being associated with Elizabeth II's favorite castle, Windsor, truly makes them the Queen's Beasts.