A Meadow in the Bronx

"Meadow" is one of those words that has had its meaning changed in the trip across the Atlantic.  In England, it means a field of grass that is allowed to grow for a season before being cut for hay.  During that season, no livestock are allowed within to browse or graze the grasses. A field of grass where livestock are allowed to feed is called a pasture. Over here, the word meadow can mean lots of other things because we are not as fussy about the precise meanings of the words the English made up.  So, for example, Central Park's "Sheep Meadow" (where sheep were actually released to graze back in the day) was never a meadow in the proper sense.  If anything, it should have been called "Sheep Pasture."  And the "Meadowlands" where both the New York Giants and New York Jets play football (in New Jersey) were never really meadows either. They were at one time brackish marshes and are now vast expanses of the invasive Common Reed ( the native/non-native status of the various Common Reed populations in North America is complex and for another posting) . 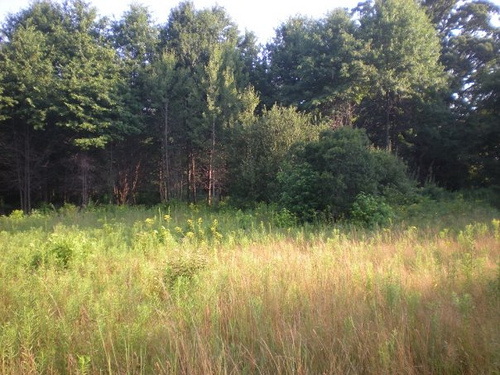 Another sense in which Americans use the word meadow is an open area of grasses and forbs in a non-agrarian habitat. And it is in that sense that I use it here. Very few meadows are self-sustaining, that is, if left alone, they will grow up to be woods.  Under some circumstances, wildfires will keep meadows open and in conservation regimes for grasslands, controlled burns are a critical management tool. The literature on prescribed burns is exhaustive and exhausting, but my takeaway is that burning is good for plants and birds that need open areas, but less good for butterflies and other insects that cannot escape the fires and are not resistant to them the way grassland plants are. Grassland insects generally repopulate burned grassland from nearby grasslands that were not burned. But in most areas of the northeast, wildfires are aggressively suppressed for fear of  their spreading to residential areas and formerly open grassland habitats shade over. And in city parks that may have an open area that could pass for a meadow, prescribed burns are simply not an option.

Enter WildMetro, a grassroots (literally) organization that combines the scholarly bent of its founder David Burg with the muscles and sweat of a corps of volunteers willing to hack away at the underbrush to free trees of  the alien vines that are choking them to death and keep some critical areas open for the plants and animals that require ever-rarer grasslands to sustain them. (That is not to say that David does not do more than his fair share of machete swinging.) To see the variety of projects WildMetro is working on you can visit its website , but the one I am writing about here concerns an acre of meadow in the south section of Pelham Bay Park in the Bronx.  Pelham Bay Park, at over 2,770 acres, is more than three times the size of Central Park.  And whereas Central Park presents the neat and orderly appearance of a long rectangle on a map, PBP is a crazy quilt patchwork of shorelines, islands, former estates, woodlands and ball-fields sprawling across the easternmost portion of the Bronx bordering Westchester County.

Here, tucked away between a series of woods and along a dirt hiking trail is a single acre of meadow which has been dubbed "golden meadow"  by someone with a botanical bent, because at least four species of goldenrod bloom here from August until the frosts of November extinguish the last embers of their glow. In addition to the goldenrods, a host of other wildflowers bloom here throughout  the growing season including dogbane, common milkweed, joe-pye weed, thoroughwort, bull thistle and a species of spirea.  These flowers draw in an incredible diversity of  insect  pollinators, many of which are unusual in urban habitats.  With a permit from the Parks Department, and working along with WildMetro, my son Jeff and I have been collecting the bees and other insects here since May.  Already, according to John Ascher of the American Museum of Natural History, we have collected a species of bee that had never been recorded from the confines of New York City before and a number of other bee species we found in the meadow had not been recorded from the City in decades.

In addition to the bees, the flowers in the meadow are often covered with other pollinators, such as wasps,  hover flies, beetles, moths, and, of course, butterflies. I have seen 30 species of butterflies in the meadow so far and I am quite sure there are at least another dozen or so there. Some of the butterflies, like the uncommon bees we found, are rare in urban habitats, such as the beautiful White-M Hairstreak that frequents the Flat-top Goldenrod. The Red-banded Hairstreak and Common Buckeye (see photos) are also a treat for city-dwelling butterfly watchers. 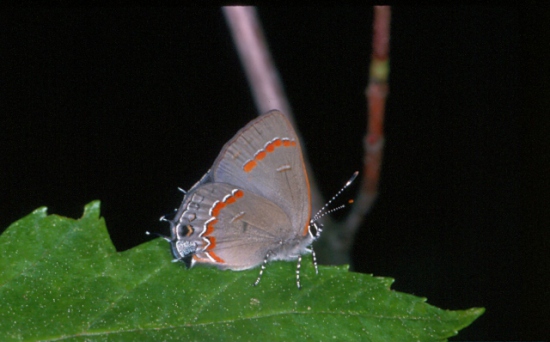 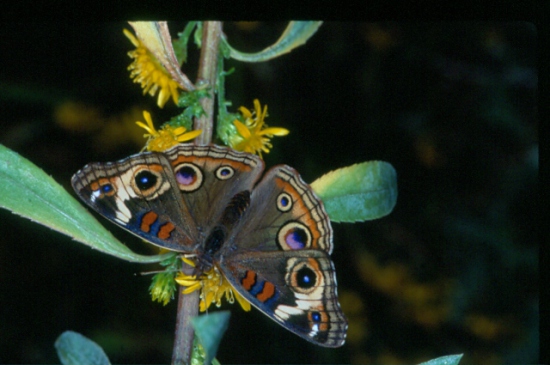 Unfortunately, it is going to take a lot of work to preserve the meadow going forward.  Vandals have been injuring the trees that surround the meadow and there is no telling if they will eventually target the meadow itself.  Litter tossed by unthinking visitors is unsightly, but not as big a concern.  The real threat is simply the natural process of succession that will turn the meadow into a woodlot if WildMetro is unable to muster enough volunteers to keep the  tree saplings at bay. And the Parks Department itself, which has shown great foresight under the leadership of Park Administrator Marianne Anderson thus far, is always under pressure to create more ball-fields, tennis courts and picnic areas.

For the time-being, though, we are lucky to have this one acre that harbors unusual plants, insects, and birds.  On one of my most recent visits, the "confusing fall warblers" were moving through the meadow, while the only Bald Eagle I have ever seen in the City soared overhead against a pure blue sky.  Not bad for the Bronx...

**
Images used with the permission of Ruth Gyure and Harry Zirlin