Manta rays and their lesser-known cousins, mobula rays, were once fished
only by subsistence fishermen because the meat is cheap and they tend
to damage fishing nets. All that has changed since the market for their
gill plates has skyrocketed as Chinese medicine has touted them as a
method for removing toxins from human blood. 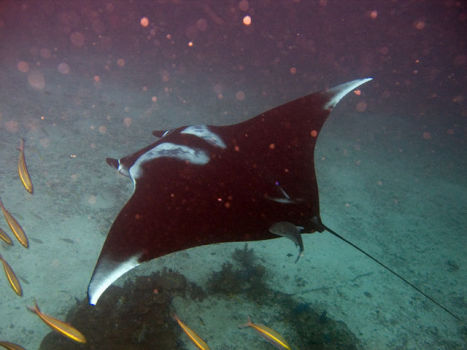 The burgeoning demand for the gill plates has increased fishing of manta rays world-wide, putting pressure on their numbers and threatening their existence. It is estimated that 100,000 manta rays are caught every year, mostly in the Indian Ocean around India and Sri Lanka, and South Pacific around Indonesia.

While that may not necessarily sound like a huge number, it needs to be seen in light of the fact that manta rays are slow to mature, have a long gestation period, and reproduce only once every two to five years.

In March 2013 the Convention on International Trade in Endangered Species (CITES) listed the species for protection. This means that parts of the creatures may not be traded internationally, though domestic trade would still be allowed. The law takes effect in 18 months. 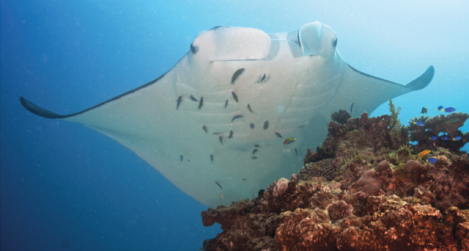 Manta Ray Being Cleaned By Cleaner Fish (Photo by PLOS/Creative Commons via Wikimedia)Right now manta ray gill plates bring in more cash than the highly valued shark fins. Much like shark finning the rays are slaughtered to remove the gill plates and the rest of the carcass is discarded. The dried gill plates sell for three times the amount of shark fins in Chinese food markets.

The gills are not proven to have any medicinal value. Even experts in Traditional Chinese Medicine say that this information is not listed in any of the texts and advises against self-medicating with any such product.

In other areas, such as the Maldives, where manta rays are protected, eco-tourism and dive tourism bring in more money than the fishing and killing of the animals does.

Conservation
Fish
News Stories
Science
Wildlife
Conservation 101: What Does It Mean To Be An Endangered Species?

Fur Or Against: Raccoon Dogs Pawned Off As Faux Fur?
World's Oldest Tracked Bird Lays Egg At 64 Years Of Age