Man Bites Attack Dog To Save His Dog's Life

We love our pets so much.  Just look at all the surveys showing that folks would rather give up their mates than their pets or that they spend more money on medical bills for their pets than themselves... Many of us would say we would risk our lives for our pets, but that's what we tell the poll takers; isn't it easier said than done?  But this man actually did save his dog, Lachie, from the jaws of death... by biting his canine attacker in the neck. 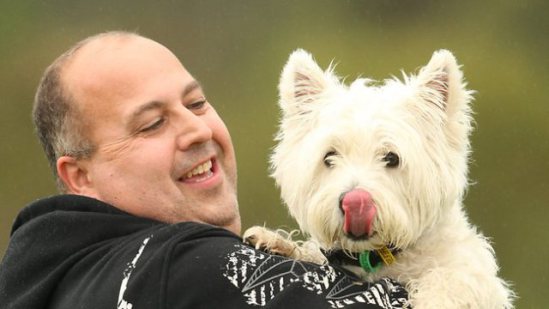 Lachie, a 3-year old West Highland Terrier of Melbourne, Australia, was out for a walk with Culprin, one day last month, when Lachie was attacked by a Staffordshire Bull Terrier mix, who was apparently on a leash.

"The dog jumped on to my dog and latched its jaws around his neck and was trying to twist and kill him," Culprin told the Herald Sun. "I flung down and was trying to push my body weight between them, trying to open its jaws. I was punching the dog because I really thought Lachie was going to die and when it didn't budge, I just bit it on the back of its neck.

Culprin said that it all happened so fast that he didn't have time to think about what he was doing; he just knew he had to save his dog.  He apparently scared the Staffordshire because the dog turned around and looked at Culprin as if in shock, as he let go of Lachie.

Culprin and his dog suffered wounds, and Culprin badly injured his back in the tussle, costing him about $1277 in U.S. dollars.   Even though the Staffordshire was on a leash, Culprin said the woman walking him wasn't strong enough to control the dog.