The Denver Dumb Friends League employees are used to dealing with their
share of stray cats, dogs, and even bunnies or ferrets, but they were a
bit taken aback a few days ago when they suddenly found themselves with a
stray tortoise. They were sure that the runaway reptile belonged to a
family before going "walk about."

The African spur thigh tortoise, which can grow to weigh up to 200 pounds and can live to be over 50 years 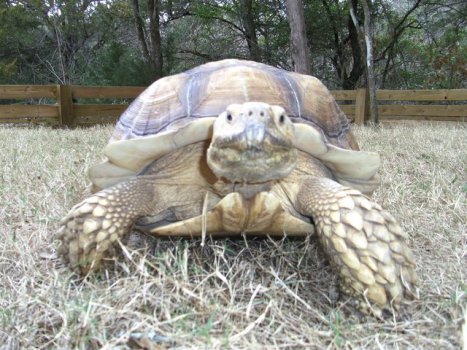 African spur thigh tortoise old, ended up at the Dumb Friends League Buddy Center in Castle Rock, Colorado. In an attempt to locate the owners of the tortoise, employees contacted Denver's 9News. Once the story aired, Millie was quickly returned home.

Despite the flood of funny lost tortoise posters on the web, and the obvious question about how such a slow creature can made a quick getaway, this is apparently a far more common occurrence than one would think  Last year the Huffington Post reported that a rare Indian Star tortoise went missing from the Cheyenne Mountain Zoo in Colorado Springs. However, he was believed to have been stolen. In 2010, the Denver Post reported that a desert tortoise named Lucy also went missing.from her Westminster, Colorado home. She was found and safely returned home.

A quick Google search will show that there is advice on out there on how to locate your lost tortoise. Along with the obvious recommendations of looking under things around the house and contacting animal shelters, there is also advice on how to tell if your tortoise has burrowed into the ground.

Unbelievably, this is a common enough problem that there is a registry for lost tortoises at LostTortoise.com, although the link and page are a little strange.

Exotic Pets
Fun Stories
News Stories
Tortoises
How to Feed a Two-headed Snake -- The Animal Video of the Day!!!
The Very Strange Animals Video Of The Day!!!

Camouflaged Critters! The Animal Video of the Day!!!

Wave "Hi" to Mommy! The "Happy Greetings" Animal Video of the Day!!!!
Comments