Margaret Charles, 79, took her dog, Maisie, for a walk in Suffolk,
England, during a recent cold spell. When she took a fall she let go of
the leash and Maisie ran off. When the Cairn terrier did not return
Charles worried 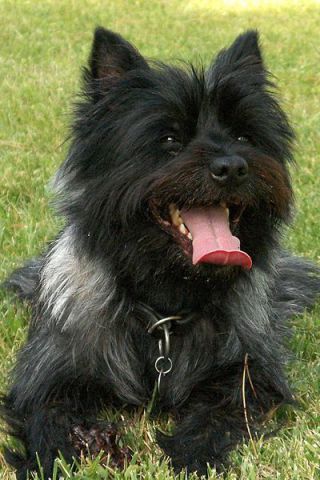 Cairn Terrier (Photo by Wotapalaver/Creative Commons via Wikimedia)that she would never see her canine friend again. Searches failed repeatedly to find Maisie in temperatures that were
dipping to 5 degrees Fahrenheit.

After eight days of a large-scale search in Dunwich Heath National Park, a search volunteer, Jenny Brown, who had brought in her tracking dog, Tigger, to aid in the search discovered Maisie not far from where she had gone missing. Her leash had gotten tangled in a tree so that she could not return to Charles. Amazingly the dog had survived by digging her own little igloo in the snow to keep warm.

After her rescue Maisie was taken to be checked out by a veterinarian. Other than being hungry and dehydrated the pooch received a clean bill of health.

Charles, who described Maisie as her "whole life," was so surprised at Maisie's miracle survival that she had to be convinced that it was true. Now she is unbelievably relieved and happy to have her best friend home again.

I Think He's Doing It Wrong -- The Animal Video Of The Day!!!