Llamas Assist In The Long Goodbyes Of The Elderly

Alzheimer's and dementia patients incur an end-of-life experience that differs markedly from their care-givers. They traverse in two different worlds which might be parallel, but often don't allow them to connect as they once did. While set schedules and antipsychotic drugs are prescribed my many physicians, the idea of adding fun and animals to one's regimen is relatively new.

In a recent AARP report, one unconventional approach is seeing significant results with some late-stage Alzheimer's patient. 95-year old Laura Damuck who lives at the Life Care Center of Nashoba Valley in Littleton, Massachusetts has come to know the comfort of llama.

The docile creature known as Travis lives in-residence at this rural nursing home and is seen here with resident Marie Waite. 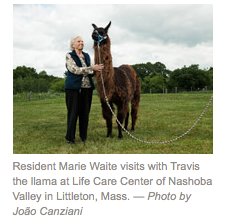 Damuck, according to her daughter Linda Valentine will "smile and laugh," even when "she doesn't recognize it's a llama." The caretakers are known to sometimes leads the llamas through the halls and into the Alzheimer’s unit, where even residents who relentlessly wander stop to pet the regal creatures.

The center's executive director Ellen Levinson, whose two golden retrievers often greet visitors at the front door notes that animals have a calming effect on their patients The walls of the 27-bed Alzheimer's unit are filled with photos of animals while bird feeders hang adjacent to nearly all the facility's windows. 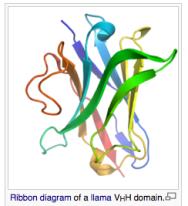 has indicated that "single-domain antibodies" has potential use in the treatment of Alzheimer's disease. And these antibodies are derived from llamas's VHH domain antibodies. Their antibodies are much smaller than humans which allows them to cross the blood-brain barrier (BBB) where certain dementia drugs can be administered. This research indicates that patient that have a history of Alzheimer's or those that are in the early stages can benefit the most.

The Roche Institute has launched a 3-year project to develop the new diagnostic tools and immunological probes to detect the characteristic proteins in the brain of an Alzheimer's patient to advance this research.

Pierre Lafaye of the Pasteur Institute says, "thanks to fragment of antibodies produced by the body of the lama, associated with a product of contrast, we hope to be able to visualize lesions in the brain."

With Alzheimer's disease affecting more that 5.1 million Americans and an estimated 26 million worldwide, it's comforting to know that the "circle of life" does truly exist and that if humans can benefit from one animal species, perhaps there are hundreds of others that might help us cure not only Alzheimer's but other forms of cancers. God save the llamas. Not only are they senior-citizen-friendly, they come part and parcel with what might ail you later in life. 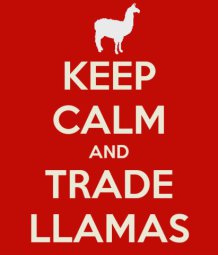 A Republican And A Democrat Agree: Pets Should Not Die On Airplanes

Flamingo Versus Eagle! The Animal Video Of The Day!!!
Comments