During a traffic stop in Indiana on Friday, State Troopers seized almost two dozen
roosters that were in the process of being transported to Kentucky where
they were to be used in an illegal cockfighting operation.
Paraphernalia commonly used in cockfighting was also found. 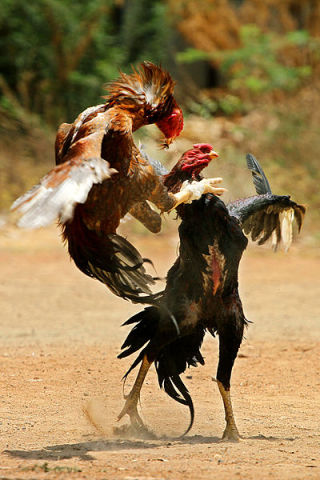 A car and minivan that appeared to be travelling together were pulled over for minor traffic violations. The Indiana State Troopers found 21 roosters in the minivan. In the car they found the items used in cockfighting. The vehicles were in route to Lexington, Kentucky, where the roosters were to be sold for a cockfighting event that was to take place later that evening.

Four men were arrested and were transported to the Dearborn County Law Enforcement Center. Three boys were not charged and were released into the custody of a fifth man. The roosters were turned over to Dearborn County Animal Control.

Cockfighting, a bloody sport between two roosters, uses birds specially bred for strength and stamina. The sport is heavily opposed by animal rights groups worldwide. In the United States the law sends a mixed message. While participating in cockfighting in anyway is against the law, it is legal to raise, train, or trade cocks or the accessories used in cockfighting.

Other birds are sometimes used instead of cocks to fight. As odd as it may sound, in 2009, authorities put a stop to a songbird-fighting ring in Connecticut that had had been using finches and canaries.

Praying with the Birds: For The Birds or Great Invention Idea?
Comments