Homeowners Associations have been developing a really bad reputation for
their dedication to making people miserable with their insistence of
strict adherence to rules and regulations. In Texas right now there is a
possible HOA storm brewing over one couple's decision to decorate
their lawn with a couple of beautiful dinosaur statues that are
apparently in violation of the covenants of the community. 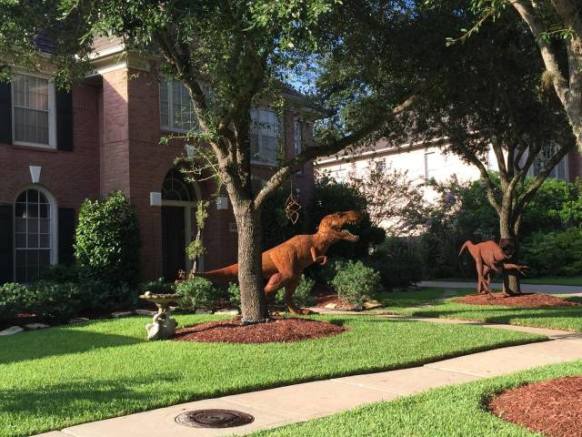 When Nancy Hentschel and her husband were on vacation in Arizona they found the tyrannosaurus rex and velociraptor statues and decided that they had to adopt them and bring them home to live. They installed the prehistoric reptiles near the front walk of their home so that others could also enjoy the sculptures.

The Hentschels have found that the dinosaurs have made them feel more a part of their community in a single day than almost two decades of living there had. They now know the neighbors who had just been strangers living nearby before. 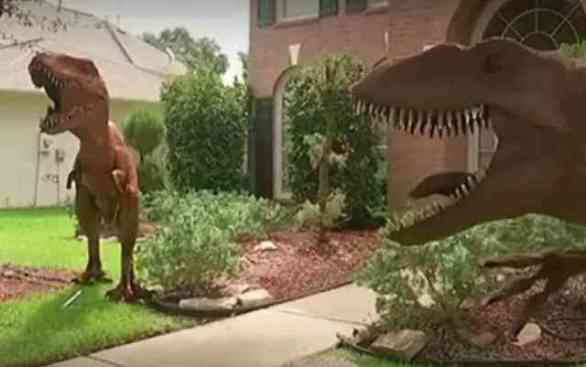 Lawn Dinosaurs (Image via You Tube)

Even though the lawn is perfectly groomed, the dinosaurs, with their lovely patina of rust, are indeed a violation, it has opened up a discussion about when rules go too far. On the community's Facebook page most people like the creatures and think that they should stay. Only a few are against them. One person likened HOAs and their zealous adherence to rules to the scourge of fascism.

The HOA is aware of the animals but has not yet taken any action. Hopefully they will act with a bit of discretion and let them stay. I am just glad that my HOA doesn't mind my rabbit, turtle, cat, crane, and frog statues or I'd be in big trouble. Animals belong in the landscape.

Creatures
Cute
Fun
Fun Stories
Funny
News Stories
Weird, Odd or Bizarre
Who Will Keep You Warm This Winter? How About K9?