New Jersey proved to be a pretty resilient state when Superstorm Sandy hit it shores back in late October. Whether affected by flood waters or power outages, New Jersey folks rose to the occasion to overcome Mother Nature's harsh blow -- while taking on the proud new moniker, "Jersey Strong." No longer punch line fodder for TV talk hosts, residents of Jersey not only attended to their individual and personal needs, but in many cases assisted in the recovery efforts of others. 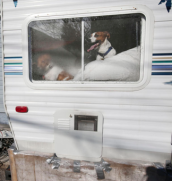 Unfortunately, some things did slip through the cracks - and when hundreds of families were left homeless, unable to take their dogs with them, many of these beloved pets had to fend for themselves. In unheated abandoned homes ravaged by the storm, these dog were also to put to the test in becoming "Jersey Strong."

This time the help came from outside of Jersey's borders. In Burlington, VT, Joan Shannon, a pet enthusiast was so taken by the stories of displaced dogs, that she took it upon herself to get directly involved. She founded Sandy Dog Nannies, an organization of volunteers willing to temporarily foster dogs affected by the storm.

The operation works very similar to a foster care system for children. Dog owners in need are asked to provide a profile of their pet which is then shared with approved foster families that have been vetted by the organization. The dog’s owner then reviews the applications and reports on the potential foster homes and selects the most appropriate offer.

The initial idea of Sandy Dog Nannies was to transport the dogs to the green mountains of Vermont, placing them with willing families.  However, Shannon quickly discovered that while storm victims were crying out for help, they also wanted their faithful hounds in close proximity, so they could visit.

Aside from wanting to assist the devastated dog victims of Hurricane Sandy, Shannon also notes an affinity to people of New Jersey on her Facebook page. "Many of us sailed at the Lightning North Americans in Toms River, NJ a couple years ago and feel a connection to the area. In addition, some of our group had to leave their homes or were stranded in their homes by Hurricane Irene last year. All of us were affected in some way. We feel your pain and want to help," said Shannon.

For those interested in registering their pets or offering their homes to help shelter one of these four-legged victims, please visit the "Sandy Dog Nannies of Vermont" accounts on Facebook, Twitter, or contact the organization by email (SandyDogNanny@gmail.com) or by phone: 802-324-3300.

Man's best friend might also be "Jersey Strong," but sometimes all of us need a little help from our friends. Much gratitude goes out to Joan Shannon and her caring team of volunteers! 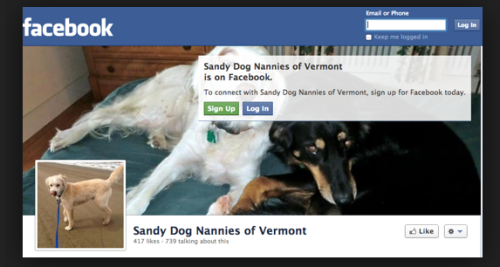 Have Snoopy And Friends Welcome Your Friends