The Javan rhinoceros once roamed throughout a sizable area of Southeast
Asia and Indonesia. In 2012 it was finally confirmed that the last Javan
rhino in Vietnam was killed by poachers for its horn in 2010. Now the
only 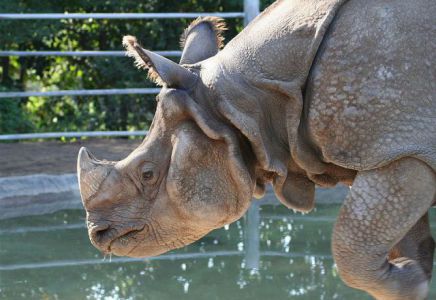 Rhinoceros (Photo by Sepht/Creative Commons via Wikimedia) remaining Javan rhinos known to exist are in a small area on the
island of Java. As few as 35-40 rhino individuals remain in Ujung Kulon National
Park in Java.

The area of Ujung Kulon was devastated by the eruption of Krakatoa in 1883. The Javan rhinoceros repopulated the area, but humans did not, creating a special environment for the animals. The rhino became protected by the Sumatran government in 1931. The first census of the rhinos was conducted in 1967 and only 25 individuals were found. By 1980 that numbered had doubled and has remained fairly consistent ever since.

The Javan rhino was originally thought to be extinct in Vietnam in the mid-1970s at the end of the Vietnam War. In the late 1980s a small population of 25 rhinos was found to somehow have survived the war.

The animals are most often killed so that the horn can be used in traditional Asian medicine. Many animals are vanishing due to the demand for these medications whose efficacies are largely unproven and have often been disproven by medical research. The rhino horn is believed to cure cancer, treat a hangover, and even calm fevers. However, the horn of a rhino is simply made of keratin, a protein that makes up our own hair and fingernails and has no medicinal value.

The Javan rhino is a shy creature, rarely seen or studied. They are solitary forest dwellers and considered to be one of the most endangered species in the world.

Many species are rapidly vanishing in Vietnam due in large part to poaching. Just a few months ago PetsLady.com also reported on the extinction of the Siamese Crocodile in the country. These two species are just the tip of the iceberg as many species remain threatened there, as well as in other parts of the world.

The western black rhinoceros was declared extinct worldwide in 2011.