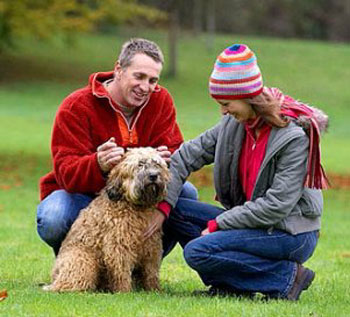 Is it me or the dog?: image via thepetscentral.comOne of the most traumatic losses in a divorce can be that of a pet when the other partner gets to keep the dog, or cat, or other beloved pet.  The newest AP-Petside Poll results show how difficult the separation of two humans and a pet would be if it were to happen to the human respondents....

The poll was taken by telephone in October 2010. There were 1,501 adult respondents, 1,000 of whom currently had pets.  Dogs and cats were represented in households at a slightly higher percentage than in 2009, with 75 percent of the respondents owning dogs and 48 percent owning cats.  Fish owners were represented at 12 percent and bird owners at 6 percent.

This poll focused on how difficult it would be to give up a pet, so the first set of questions centered on whether or not the respondents had already given up a pet for one of several reasons.  For example, 'Did you have to give up your pet because you moved and your new residence did not allow pets?" Or because "You moved in with a roommate, spouse, or significant other who was allergic to your pet?" Or because "a roommate, spouse, or significant other didn't like your pet?"

Only 2 percent of the respondents said they had given up a pet because a roommate, spouse, or significant other was allergic to or did not like their pets.  Compare this to the 14 percent of persons who gave up a pet because a new residence didn't allow pets, or the 52 percent whose pets were too sick to care for at home.

Let's see now... what conclusion can we draw from this information?  Well, it's not as bad as it may seem.  There are 84 percent of us who say they would choose their spouses over their pets if they had to; still 14 percent of us would choose their pets over their human mates if they had to make a choice. Thirty-four percent say the decision would be extremely difficult and 46 percent say the decision would not be a difficult one.

What we don't know is if it would be easy for the 14 percent of owners who choose their pets over their mates to make that decision....

News Stories
Pets
Endangered Whale Jerky Dog Treats Are Now Off The Menu
Prosthetic Legs For A Cat! The Animal Video Of The Day!!!