If Apes Can't Talk, How Can They Dominate A Planet? 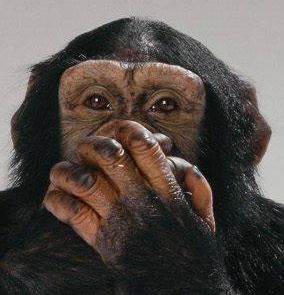 There doesn't seem to be any end to the "Planet of the Apes," film franchise. Not only has there been five flicks (including one remake) and two TV series -- this week, yet another movie opens to break box-office records. However, if we were

ever able to believe the premise behind those stories could come close to being possible some day, we'd also have to believe that apes would eventually be able to talk. But according to all of the scientific research conducted to date - this theory is undeniably impossible.

According to the research done at the Max Planck Institute, humans possess vocal chords that can be coordinated to move freely in the larynx -- whereas, the apes or even their cousins, the chimpanzees simply don't come equipped with the same vocal make-up.

Mark BekoffEvolutionary biologist, Marc Bekoff even takes it one step further. "If they needed to be able to speak like we do in a language like we have, they would," Bekoff told Live Science. "That doesn't mean they don't have their own language. All the great apes, including the chimps — have very complex communication systems. And they interact with their species using vocalizations, facial expressions, gestures, postures, gait … (and) they can send very subtle signals with a lot of nuances by varying any one of [those] components."

However, not being able to talk doesn't mean apes cannot understand English. Some primates have learned how to communicate in specific ways with their human handlers. One famous case is Kanzi, a 33-year-old bonobo, who scientists have shown has an innate ability to comprehend the English language.

In this vid, reporter Lisa Ling communicates with Kanzi on The Oprah Show in 2011.

Additionally, according to Bekoff, "Kanzi could figure out human sentences — even nonsense sentences." In fact, someone once asked Kanzi to take a microwave outside, and he followed that request, even though it wasn't a common kind of command.

In "Dawn of the Planet of the Apes," Caesar is the most fluent speaking ape in the film, but other chimps, gorillas and orangutans seem to pick up on some of the leader's novel vocalizations very quickly. "Learned behavior has been observed in real-life chimp communities, where some apes have picked up American Sign Language," Bekoff said.

"A lot of [chimps] learned sign language not by being explicitly taught, but by observing the other chimpanzees," Bekoff said. "They were acquiring American Sign Language by just observation, and somehow — to me, it's remarkable — they could then put meaning to the different signs."

So, should we fear apes taking over the planet any time soon? This could possibly be true, if we're talking about them becoming superior intellectually and mastering a command of the English language.

However when it comes to force, that's something entirely different. Gorillas, for one, are six times stronger than we are. They also have superior physical speed and if mobilized and with the right motivation, there is no doubt that an army of apes could overtake an equal number of humans, hands-down.

Ah, but there's the rub -- it lies in the numbers! Thanks largely to us—there are so few of them in existence today. As a result of hunting and deforestation, the World 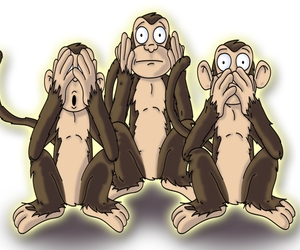 Wildlife Fund (WWF) estimates that there are at most, only 500,000 great apes left living in the wild—about the population of Fresno. Meanwhile, there are nearly 7 billion humans living in the world. So a Planet of the Apes looks doubtful, whether or not they can learn to see, hear or speak evil (or otherwise) in the English language.

You Shall Not Pass, Dog! The Animal Video of the Day!!!

What Does An Elephant & Mouse Have In Common?
I'm So Excited! The Dancing Animal Video of the Day!!!
Comments