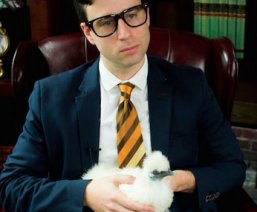 Inbound marketing firm HubSpot, which has built a solid reputation of increasing traffic to websites is promoting another form of traffic this year — namely, herding pets and animals into their offices. In an effort to increase employee morale by upping the ante on Corporate America's ‘Bring Your Dog to Work,’ programs, HubSpot’s top human resource gurus came up with a groundbreaking employee perk: Productive Employee Things -- better known as the P.E.T. Program.

HubSpot’s research revealed a 278% uptick in employee satisfaction when HubSpotters came within a 10-foot radius of a dog. “What's more, data from a third-party, double-blind study showed that not only were these results true for dogs, but they also held true for all animals,” noted HubSpot thought leader and dreamer, Orlando Scampington. 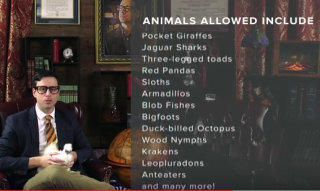 So this April, in addition to their many other innovative employee programs, such as “Mandatory Cheese Wednesdays,” HubSpot has globally declared open-season for bringing your feathered, fuzzy, furry, or scaly companions to work. All pets are welcome at all HubSpot offices, no matter if they squawk, meow, growl or eat ants.

With this announcement, HubSpot also issued a master list of their acceptable and top workplace creatures, and are asking the public to rank their selections. Noted, alongside the reasons why they were chosen —  are chickens because “they can brighten up any employees morning with fresh omelettes."

Octopuses were favored because they could supply fresh ink for their staff's quills (wonder how many HubSpotters still use pen and ink these days?) and Alpaca’s for licking up coffee spills and cleaning up one's shoes, with a real alpaca-spit shine.

In an effort to really sell the program to the non-believers, Scampington admits to really being “committed to this campaign -- even if that means anteaters roaming the halls, parrots nesting in the kitchen, or awkward turtles in our marketing meeting."

So readers, what you do think about this unorthodox match-up of man and beast in the workplace? Is this something your place of business would condone, or might your CEO have objections?

Something to think about, particularly if you have not realized before now, today is April Fool’s Day, and HubSpot has one heck of a sense of humor. Even, if they haven’t truly converted their Cambridge, Massachusetts

headquarters into a ‘Noah’s Arc’ of sorts, for those of you who like to monkey-around at the office, it sure sounds like a fun company to work for. Happy April Fools!!!

This Hulk Is Truly Incredible! The Animal Video Of The Day!!!
Photographer Captures Animals 'Being Human'

SmartBird -- The Artificial Animal Video Of The Day!!!
Comments