How To Keep Your Dog From Eating Poop 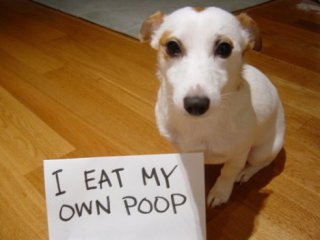 Just trying to keep clean, Mom!: image via maniacworld.comDoes your dog eat his own poop?  According to Dr. Ben Hart of the School of Veterinary Medicine at the University of California - Davis, about 16 percent of all dogs eat their own poop on a regular basis.  Disgusting, you say?  Well, Dr. Hart has a theory about why dogs may indulge in this behavior and what you can do about it.

Hart, presenting at the annual meeting of the American College of Veterinary Behaviorists and the Veterinary Society of Animal Behavior in San Diego earlier this month, said that the most probable theory for why dogs eat poop has to do with a dog's tidiness (!)  Noting that wolves clean up after themselves immediately after they defecate in their dens to keep the feces from attracting parasites, he contends dogs eat their poop for the same reason.

Presenting data from an Internet survey he conducted, Hart said that stool-eating dogs are most common in households of more than one dog and that the stool-eaters were identified by their owners as greedy eaters. Perhaps both of these behaviors represent  competition among the canine members of the house for food.  I have noticed, too, that in households with multiple dogs, the pooches scarf up their food pretty quickly and are quite protective of it, growling if their companion dog comes near it.

Border Collies and Shetland Sheepdogs were most likely to eat their poop, but the least likely breed of dog to eat his own poop,, according to Hart's survey, is the Poodle. (They do say Poodles are very smart!)

Hart also found through his survey respondents that commercial products for poo-eaters don't seem to work and behavior modification has likewise not had much success.  But Hart, himself, offered a solution to the problem: Pick up after your dog.