Hemingway's Polydactyls Not Toeing The Line With The Feds

It's higly likely if Hemingway were alive today, he would be exceedingly proud to know his cats' descendants are as feisty as he was back in the day. There's a continuous line of DNA that's descended down through the years to the current felines that now take up residence at the Ernest Hemingway Home & Museum. And that peculiar genetic makeup has to do with their toes. They have six and they and Michael Morawski, the Museum's owner and CEO are digging their heels in for a court battle that's continued with the U.S. government for the last 8 years.

The cat fight started when the U.S. Department of Agriculture (USDA) issued a mandate requiring the museum to obtain an animal exhibition license to keep the 40-60 (number varies dependent on who's doing the counting) on the 1-acre property. The government agency also claimed the museum was in violation of the Animal Welfare Act by not caging the cats.

According to a Keys News report on April 28, 2012, Morawski argues that the cats do not fall under the regulatory umbrella of the USDA, or more specifically, the Animal and Plant Inspection Services, because the cats are not made to perform tricks, are not crossing state lines nor being sold or distributed.

Hemingway's cats are healthy and receive regular veterinary check-ups. As far as the cats' need to be caged, the museum hired a cat behaviorist and installed a $15,000 nylon fence in 2008 to prevent them from leaving the grounds.

SnowballIn 1935, the famed author received a cat named "Snowball" from a ship's captain while living and writing in Key West. With paws featuring six toes, "Snowball" was the first of a long line of felines that has helped make the Hemingway Home and Museum one of the most popular visitor attractions in the Florida Keys.

During the summer of 2011, U.S. District Judge Jose E. Martinez agreed with the USDA ruling that even though the cats are born, live and die on museum ground and are never bought or sold, they are featured on the museum's website and that's the smoking gun that qualifies the case under the Animal Welfare Act's commerce clause.

Cara Higgins, the museum's attorney took umbrage with that interpretation. "Judge Martinez essentially ruled that the Animal Welfare Act regulates not just animals, but pictures of animals," Higgins said. "This is not what Congress intended in passing the Animal Welfare Act." So, in December last year, Higgins appealed that decision before the U.S. 11the Circuit Court of Appeals.

"This was intended for circus animals or animals that are bought and sold across state lines. It was never intended to regulate pictures of cats."

"When viewed individually or in the aggregate, the Hemingway cats have no impact on interstate commerce," Higgins wrote in her reply. "We're saying the cats have to physically move across state lines for this to be applicable."

While this case is still pending, the Key West city commission has sided with the museum's claim that

the resident felines are not exhibits. With the recent HBO movie Hemingway & Gelhorn, perhaps more attention will be paid to allowing the Museum to continue caring for the cats in the manner they have grown accustomed to. Many named after prominent movie stars of the past, being born into the Hemingway household is a purr-fect environment for leading a long and happy '9 Lives' - that is, of course - when you're not going toe to toe with the Feds. 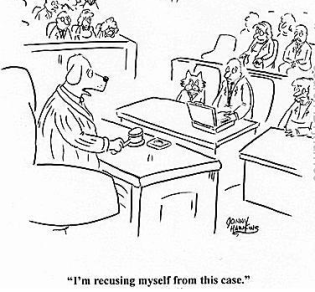 Cats, Capybaras & Coffee Combine At The Capyneko Cafe
Pet Fashion Statement Neckties
View My Menacing Presence! The Lion Under The Bed Animal Video Of The Day!!!
PetsLady's Pick: Adorable Bowl Of Kitten Of The Day
Comments