Ernest Hemingway was one of the great authors of American literature and
was also well known for his home in Key West, Florida, and for his love of cats. In 1964, three years after his suicide, his former home was
turned into a 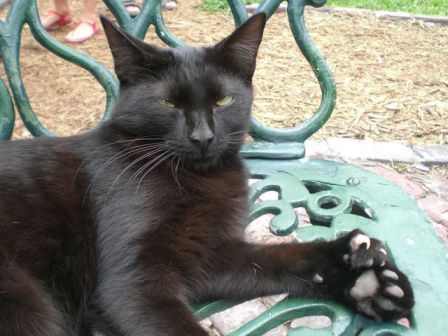 One of the Hemingway Cats (Photo by Averette/Creative Commons via Wikimeda)museum and in 1968 it was designated a U.S. National Historic Landmark --
cats and all. Now, more than 40 years later, the cats are at the center
of a legal battle over who should be overseeing the cats under the
Animal Welfare Act.

The many cats in residence at the Ernest Hemingway Home & Museum are all polydactyl cats, meaning that they have extra toes. In this case they are six-toed cats and they are all descendants of Snowball, a cat that was given to Hemingway as a gift by a sea captain. Polydactyl cats have long been believed to bring good luck.

The museum has spent nine years trying to keep the cats out of reach of the Department of Agriculture. The battle ended in failure December. 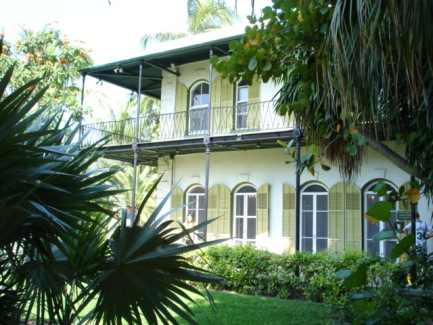 Hemingway House (Photo by Hein.Mück/Creative Commons via Wikimedia)The United States Court of Appeals ruled that the federal agency has the power to regulate the cats under the Animal Welfare Act. The legislation applies to animals in zoos and traveling circuses. Since the museum uses the cats in promotional material, sells cat-related merchandise, and makes them available to visitors, the felines fall into this category. Essentially this means that the cats are a living exhibit and require a federal license. The court also indicated sympathy with the museum for the legal dilemma, citing that the cats did not seem to need protection under the law. However, they are still covered by and subject to the law.

At the heart of the battle is the health and welfare of the 45 cats. The museum maintains that it makes sure that the cats are exceedingly well cared for. They receive weekly veterinary visits and most are spayed or neutered. They are free to roam the house and even have their own graveyard in a corner of the garden.

When People for the Ethical Treatment of Animals (PETA) was sent in to investigate the museum in 2005 (at the request of the Department of Agriculture) they found a group of very happy, healthy cats. However, the Agricultural Department says that they are just following the law. If any animal is covered by the act, then they are determined to make sure that they are doing their job for the welfare of the animals.

For now, the museum will go on unaffected by the ruling. A settlement that was reached with the department in 2008 granted the
museum an exhibitors’ license provided that the facility extended the height of the
fence surrounding the property, added insect mitigation, and upgraded the existing
cat shelters.

Despite the obvious evidence that the cats are very well-cared for, the Department of Agriculture continues to spend tax dollars to battle the museum. The museum owner is considering whether or not to appeal to the Supreme Court.

The Animal Welfare Act was passed into existence in 1966. The Department of Agriculture first approaced the the museum in 2003.

Get Ready For An Overdose Of Cute! The Animal Video Of The Day!!!
The Loss Of Pets Captured in 'Last Moments' Of Photographer