Just over a week ago Greg Beldham went out for a relaxing afternoon of
salmon fishing on Nanoose Bay in British Columbia. It was hardly the
quiet trip he had planned when a transient group of killer whales showed up around his boat. They had cornered a harbor seal and began hitting it against the hull of his boat
before enjoying their snack. 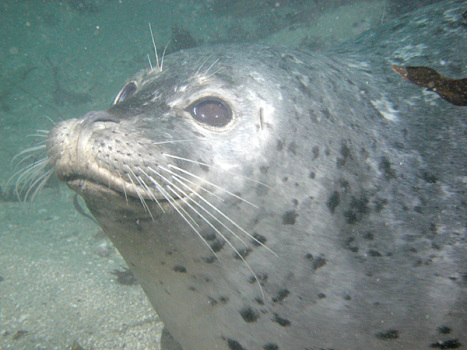 The desperate seal wagered that Beldham was friendlier than the pod of hungry whales and threw itself on his mercy -- and his boat. It jumped aboard the platform where the engines are located. The exhausted seal refused to leave Beldham's company, so he took the seal to the shallow waters off the coast of Mistaken Island. After some coaxing and reassurance, the seal finally took the plunge back into the ocean and swam away.

Beldham, for whom the experience was definitely a first, commented that the seal had looked directly into his eyes before it made the decision to trust him and leapt onto the boat. The poor creature looked so tired and worn out that Beldham couldn't help but take pity on it and lend it aid.

The populations of both orcas and harbor seals have increased greatly along the coastal waters from Alaska to Washington since the 1970s. That was when the bounty was lifted on harbor seals.

While seal populations are not considered threatened, commercial hunting is illegal. This ban is covered under the Marine Mammals Protection Act.

How To Make A Raccoon Happy! The Animal Video Of The Day!!!

Add An Armadillo To Your Home Decor
Comments