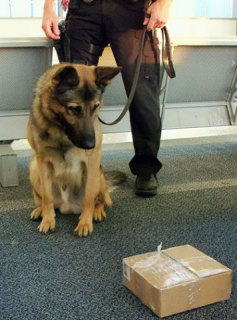 Dog trained to sniff for contraband: image via dogblog.dogster.com Dogs are extremely sensitive to their owners' every move, and this sensitivity is even greater between dog handlers and their working dogs.  The question, to Dr. Lisa Lit of the University of California, Davis, was whether or not a handler's beliefs might interfere with the results of a search, say, for drugs or explosives.

Eighteen professional dog handlers and their dogs, trained to find explosives and/or drugs, participated in a study conducted by Dr. Lit and her colleagues. Researchers used four rooms for the searches, with 36 searches scheduled in each room. Each dog and handler had five minutes for each of 8 searches.

The handlers were told that some of the searches might contain up to three target scents and that in two of the cases the target scents would be marked by pieces of red paper.  Recorders, who were blind to the study, kept records of each result indicated by the handler where the dog found a scent.

Known only to the researchers, however, the searches contained no drugs and no explosives.Two of the targets in each search contained, instead, hidden sausages. Thus, any 'detection' at all had to be false.

But of 144 searchers only 21 did not identify a target.  All together, the group of handlers reported 225 false alerts, and in the vast majority of the false alerts the red paper was present, even if there was no sausage present. In fact, almost all of the errors were made where red papers were present, indicating that it was the humans who communicated this to their dogs, presumably unconsciously.

When we bring this situation into the real world we have to ask ourselves if handlers are unconsciously profiling individuals as being 'likely' to carry drugs or explosives, and would not this interfere with a dog's ability to perform his job.