When the Meech family of Northamptonshire,
England, came home from a day out they were shocked to find son Tom's
hamster stuck fast to the bars of its cage and hanging in mid-air -- on the outside of the cage. There was no telling how
long the poor rodent had been stuck there. It was a gruesome sight at
first and the whole family was in an uproar trying to figure out what
was wrong. 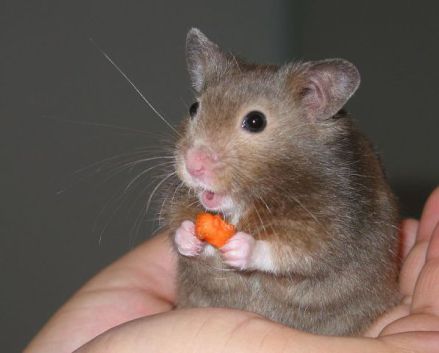 Mom Kate took a closer look and realized that there was something round protruding from Smurf's furry little cheek. It didn't take long to deduce that Smurf had somehow eaten a small magnet and it was now holding the animal to the metal bars of its cage. She managed to remove Smurf from the bars and rushed to the vet.

It turned out that the small magnet was in the hamster's cheek pouch, and the magnet appeared to have come from son George's Spiderman toy.  It caught the rodent five inches up the bars. After a few days the hamster was able to pop the magnet back out. The vet said that she had never seen anything like it.

The Meeches think that Smurf had been chewing on the bars and had managed to slip out, find the magnet, and pocket it, with near tragic results. Smurf is back to her old self and none the worse for the experience. The family is planning to keep the tiny magnet as a souvenir.

You might say that Smurf had been hanging on by the skin of her cheek.