Google Glass For The Praying Mantis?

Many have wondered if the "Praying" Mantis was mistakenly misspelled, and that this very unique insect 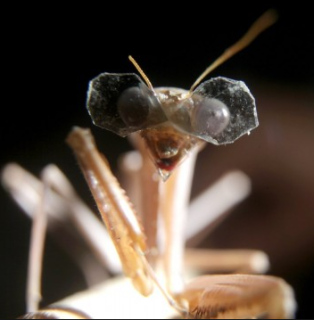 which belongs to the "Mantidae" family should be referred to instead, as the "Preying" Mantis.  And to that point, with some very intriguing scientific research underway this week, it would seem that this predatory critter is being equipped with something comparable to Google Glass to get even more upfront and personal with its prey.

While not actually the Google Glass that comes with that hefty $1500 price tag, in an ongoing series of experiments at Newcastle University, neuroscientists strapped on the world's tiniest pair of 3D glasses to a number of praying mantises. According to a Daily Mail report out of the UK, this team created the miniature glasses to investigate the capabilities of the praying mantis' 3D vision, which is the only insect known to see in three dimension versus 2D. 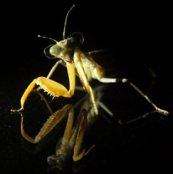 The experiments are said to prove that despite its simple nervous system, if the insect processes 3D images differently than humans, it is hoped that this  £1million research could provide insight as to how to develop cheaper and less technical iterations of this technology.

"If we find that the way mantises process 3D vision is very different to the way humans do it, then that could open up all kinds of possibilities to create much simpler algorithms for programming 3D vision into robots," stated Dr. Vivek Nityananda, who's working on the project with Dr. Jenny Read.

Read, who heads up these experiments said, "despite their minute brains, mantises are sophisticated visual

Dr. Jenny Readhunters which can capture prey with terrifying efficiency -- we can learn a lot by studying how they perceive he world."

It's the first major research conducted on mantises since 1983 when Samuel Rossel discovered they had 3D vision. Dr Rossel placed prisms over their eyes and creating an optical illusion that an object was within their range, triggering a striking reaction from the mantises.

Now, the only question remains, equipped with these hi-tech glasses, will the praying mantis become even more of a predator than it already is. And if so, which one prey stan

ds to be the most at risk. Well, since "sexual cannibalism" is a behavioral trait female praying mantis are known for, I would suspect that either the males obtain their own pair of 3D glasses or head for the hills - less they be caught in the sight line of all those hungry bespectacled females! Ouch!

Feeding Frenzy! The Animal Video Of The Day!!!