Going For The Gold, Zebra's Pigmentation Puts Target On Their Backs

Camouflage in the animal kingdom is the result of evolution over long
periods of time where certain species begin blend into their habitat to
avoid predators.  A
zebra's nemesis is the lion, but since the 'king of the jungle' is color-blind, when the
zebra runs in herds, lions typically can only see a collection of lines
moving up and down. However as rare as it is, when a Golden Zebra runs
in that same herd, lions can easily spot them, making them easy prey.

On the Big Island of Hawaii, a zebra named "Zoe" is known to be the only such zebra living in captivity today. Golden Zebras, or what some incorrectly refer to as "white" or "albino" zebras are rare, but have been found and documented in the wild. 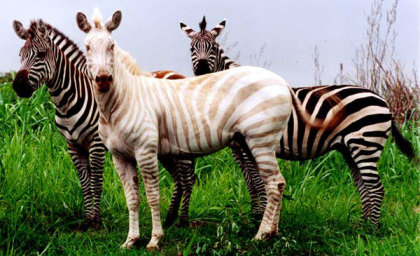 Born on September 16, 1998 and shortly after her and her mother, Oreo were moved to the Three Ring Ranch, a private animal sanctuary, its believed that Zoe would not have lived long in the wild had she not been sequestered into captivity.

The condition known as amelanism or amelanosis is a pigmentation abnormality characterized by lack of pigments called melanin which in addition to zebras and other mammals affects some reptiles, birds and fish. Not be confused with 'albinoism' which is a congenital disorder characterized by the complete or partial absences of pigment in the skin, amelanism is the lack of pigments  commonly associated with a genetic loss of the tyrosinase function.

The appearance of an amelanistic animal depends on the remaining non-melanin pigments. The opposite of amelanism is melanism, or an overabundance of melanin.

Over time, there has been reports of at least two other "white" zebras held in captivity. One in Germany about a hundred years ago and another at a zoo in Tokyo in the 1970's. But today, according to the Three Ring Ranch administrators, they believe the only Golden Zebra alive today is Zoe.  And if anyone has heard of other "white" zebras roaming the planet, they would be very interested in hearing about them.

Although Zoe's amelanosis condition may cause health complications as she ages, for now the only medical 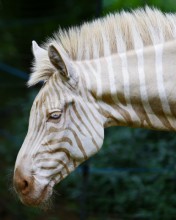 issue appears to poor night vision. In an attempt to void off other ailments such as kidney failure that might affect Zoe later in life, The Three Ring Ranch have put her on a low protein diet. They also monitor her for signs of sunburn or skin cancer, and as with our their other non-endangered animals, she will never be bred.

Zoe & TootsieZoe was extremely happy when her little sister (Tootsie) arrived on the scene, a few years back. Since she is a very social zebra, she'd rather run with her younger sister then venture off alone. However, there was some interesting "herd" pyschology that occurred after Tootsie's birth. While Zoe had been accustomed to being an "only child," his mother Oreo went into a protective maternal mode where she actually prohibited Zoe from coming near the new fold.

Zoe was forced to watch from a distance, which according to the Three Ring Ranch folks placed a lot of stress on the Golden Zebra. If she came too close, her mother would chase her away, even biting or kicking her at times. Zoe was very confused since herd animals instinctually need to maintain visual contact with the other members of their herd in order to stay calm.

After a week or so, Zoe was able to once again fraternize with little sis. Today, they are often seen grazing in the pasture and are known to play well together. However when Tootsie chooses to play rough, it's been said that "like a well-mannered babysitter, Zoe turns and jogs away," to apparently give the little one, her space.

And while Zoe might have worked out her "identity" issues of being "Golden" now that she's safe in captivity, you have to wonder if zebras that were cross-bred with horses or donkeys have a hard time figuring out what herd they should be running with? 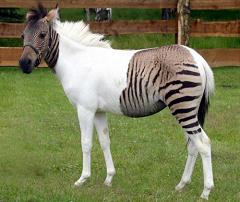 Where The Pets Are... And Other Stats Released By Vet Association
Top Pet Tweeters Aren't Just For The Birds