Just when you thought it was safe to go back to India, scientists had to go and find Poecilotheria rajaei, AKA the toxic tarantula the size of a human face!

These huge spiders were recently discovered on the northern regions of the island off the coast of mainland India. First identified by a member of the British Tarantula Society when a villager donated a dead specimen in 2009, we are just now classifying and learning more about this mammoth arachnid due to its rarity and the savage civil war waged in Sri Lanka late that year. 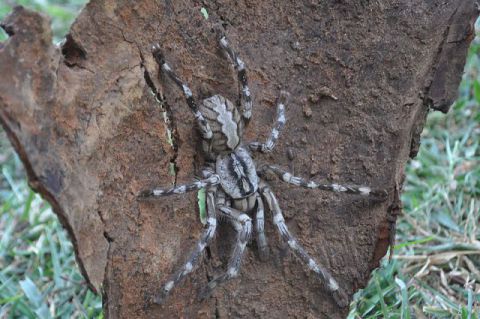 “Pokies” are an arboreal species, but due to heavy deforestation of the island, they are starting to use buildings as shelter. With eight inch long legs and pink, yellow and white color combinations, they are an unmistakable sight. Since they are relatively rare, scientists had thoroughly search enough forests, jungles and even a hospital to collect enough spiders to confirm that Poecilotheria rajaei is indeed an undocumented species of tarantula.

Other tarantulas in the “Poecilotheria” family of spiders are native to India and Sri Lanka, and are known for their highly toxic venom, penchant for living in trees and bright, vivid coloring. While tarantulas might be scary for some people, there has never been a recorded human death that has resulted from a bite. This new discovery isn’t even the largest tarantula in the world! The title goes to the Goliath bird-eating spider, which can have a leg span of over one foot long.

Check out the “new” spider in the video below to get aquainted with the latest 8-legged discovery:

Why We Love Jack Hannah -- The Animal Video Of The Day!!!

GoPro Dog! The POV Animal Video Of The Day!!!

Problems With Cat Fur? The Animal Video Of The Day!!!