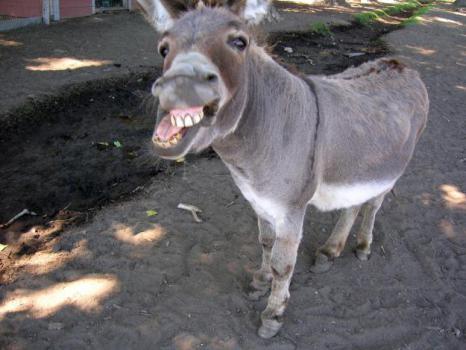 Donkey with Attitude (Photo by Yousafzian2/Creative Commons via Wikimedia)
first place. Not to mention the fact that you also had to steal the
donkey in the first place.

Such was the basis for three Colombian criminals and their plan to burglarize a convenience store in the wee hours of the morning in the small coastal town of Juan de Acosta. They entered the store through the roof and stole rum, rice, tuna, sardines -- everything they could get their hands on. Then they loaded their ill-gotten gains onto the donkey, Xavi, to haul their haul away.

Xavi was apparently a more law-abiding donkey than the gang of three had counted on and began to bray loudly, alerting neighbors and nearby police. The criminals were forced to abandon their plan, their loot, and Xavi and take it on the lam.

Xavi was an honored guest of the police department for 12 hours as his owner was located and came to collect him. All of the merchandise was recovered and returned to the store.

There was no word on the criminals, but chances are they will eventually get caught and prosecuted for being stupid. If not for this crime, then for their next ill-conceived plan. Everyone be on the lookout for the get-away llama!